On the outside, Apple’s new Mac Mini doesn’t look that different. It’s the same silvery, understated box that Apple has been selling for years.

But inside, the company has done much more than upgrade the processor and drop the price by $100: It has made the tiny desktop computer a whole lot harder to repair or upgrade.

“Sometimes we just don’t understand what goes on in hardware designers’ heads,” the team at iFixit, which took apart the Mac Mini, wrote today. “Apple took one of their most-fixable, most-upgradable products and broke it.”

First, Apple “updated” the Mac Mini’s case by replacing easy-to-remove screws with new T6 Torx Security Screws. You probably don’t have a Torx screwdriver in your repair kit — unless you’re a professional computer repair person — and this particular variety seems to be especially rare, so that makes it considerably harder for most people to open the case. (Note: iFixit, whose business is helping people repair gadgets, sells a T6 Torx screwdriver for about $5.)

Second, Apple soldered the RAM onto the motherboard, making it extremely difficult to remove without damaging the components. (Previously, only the CPU was soldered on.) So you can forget about easy memory upgrades.

Overall, iFixit lowered the device’s repairability score from 8/10 (one of the highest scores it has given to Apple devices, which are notoriously difficult for customers to service) to a more middling 6/10.

Other highlights of the teardown include the expected Intel Core i5-4260U Processor with Intel HD Graphics 5000, and 4GB of LPDDR3 DRAM chips from Samsung.

For more details, check out the full Mac Mini teardown on iFixit. 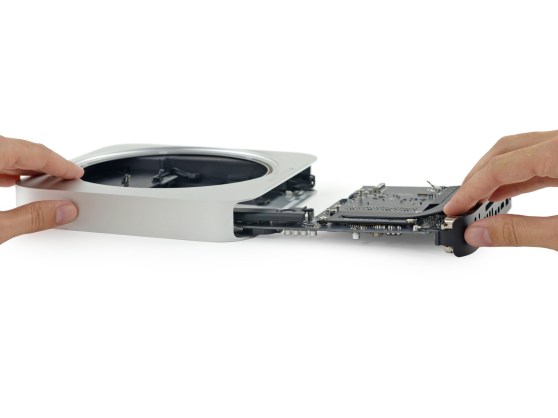 Above: Sliding out the internals of the 2014 Mac Mini. 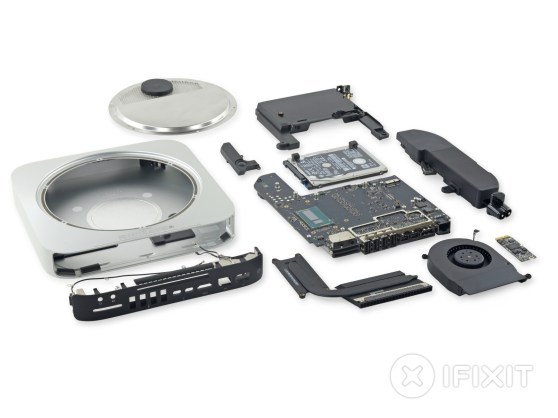 Above: All of the 2014 Mac Mini components laid out on a nice, white table.