Updated: Oct. 25, 9:45 with information about MacBook Airs and what Apple is doing

Apple just released its newest operating system, Mac OS X Mavericks, and one of its biggest innovations is that it is completely and totally free. It has 200 new features, Apple says, and “adds new core technologies that deliver breakthrough power efficiency and responsiveness.”

But the new OS release, named for the famous surfing location in northern California, also crashes just like the big waves it was named for. 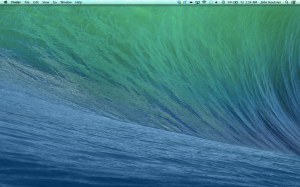 Above: Mavericks on my MacBook Air

I’ve been using Mavericks on my year-old MacBook Air for two days and, in those two days, have experienced no fewer than four crashes, some upon waking, one upon connecting an external disk to back up, once when attempting to use Skype, and others for no apparent reason other than that the CPU was maxxed out on Safari and Mail.

i hate mavericks!!! i used it in development and voiceover would repeatedly crash

But those minor issues pale in comparison with your entire computer crashing repeatedly.

I don’t think Mac OS X Mountain Lion crashed on me more than once, if ever, in the year or so I ran it on my MacBook Air. So four or five crashes in two days is a little shocking to say the least. In at least one case, while preparing for an interview with HootSuite’s Ryan Holmes yesterday, it reduced me to paper, pen, and smartphone.

Yes, the dark ages have returned.

Still, there’s probably not enough evidence yet on a widespread basis that the operating system upgrade is buggy or faulty — although the comments below this story are starting to change my mind on that — and plenty of people are enjoying Mavericks and the performance benefits it provides for even older hardware — as am I, when not restarting my laptop.

So it’s possible that the fault lies with me and others who are having the problem — although I will say in my defense I have very little software actually installed on this machine, since I rely almost entirely on web-based software.

But a surprising number of the people below who have commented since I posted this in the wee hours of the morning have mentioned MacBook Airs in combination with freezes and crashes, which leads me to believe there may be something about MacBook Airs and Mavericks that is not quite clicking.

And I just experienced another freeze and crash, about five minutes ago, while trying to back up my laptop.

I’ve asked Apple for comment about the severity and frequency of Mavericks crashes compared to previous OS X versions, and the company has said that it does not have one. But I am in touch with Apple, have provided representatives with logfiles, and the company is examining them and has promised to get back to me.

In the meantime … what are you experiencing. More crashes, or no crashes at all?