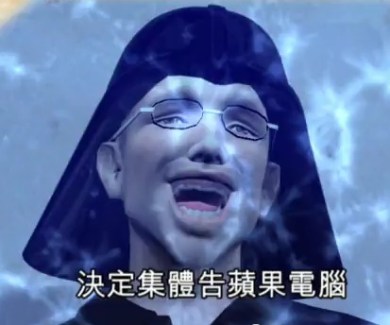 “We’ve now passed RIM, and I don’t see them catching up with us in the foreseeable future,” Apple’s CEO Steve Jobs said today. And with that, he began ruthlessly tearing down Apple’s mobile competition.

Jobs was referring to the iPhone’s sales win over RIM this past quarter. He went on to say that it will be a challenge for RIM to create a competitive platform, and even more so for RIM to convince developers to create apps for the revamped BlackBerry OS 6.

Jobs made the comments during the company’s fourth quarter earnings call. Even with the somewhat murky call quality of Apple’s earnings live stream, it wasn’t hard to tell that Jobs didn’t have much confidence in RIM’s ability to make a comeback.

He went on to say that Google often characterizes Android as open and iOS as closed, but he feels that is “disingenuous and clouds the real difference between our two approaches.” The first thing that comes to mind to him when he thinks “open” is Windows, but when it comes to Android, “open” appears to lead to fragmentation. Jobs pointed out that both HTC and Motorola install proprietary user interfaces on Android and that the recently released Twitter client TweetDeck had to compensate for “more than 100 different versions of Android.”

Jobs then moved on to apps. He mentioned that some Android apps only work on select Android handsets, whereas developers only have to worry about two versions of the iPhone OS — the current one, and the previous release. Not surprisingly, Jobs says that Apple offers “the easiest to use app store in the world” — something that is indeed true for now, even if he does sound a bit smug saying it.

Android being open is a “smokescreen” Jobs said. “It’s really about fragmented versus integrated. We believe integrated will trump fragmented every time.” He once again used Microsoft as a positive example by pointing out that it abandoned its fragmented PlayForSure portable media player pursuit and instead “copied Apple” with the more integrated Zune platform.

When it came to tablets, he was careful to point out that there are “just a handful of credible entrants” coming to the tablet space, and that most of them were relying on 7-inch screens compared to the iPad’s 10-inch display. Since screen measurements are diagonal, a 7-inch screen “is only 45 percent as large as a 10-inch screen.”

Jobs doesn’t believe seven inches is enough space to create good tablet apps. “One could increase the resolution to make up for the difference, but it’s meaningless unless the thing also includes sandpaper so users can sand down their fingers.” Ouch.

Jobs went on to point out that Google is telling developers not to use Android 2.2 (codenamed “Froyo”) in their tablets — something that likely led LG to delay its Android tablet. “What does it say when your software supplier says not to use their software in your tablet?” Jobs surely knows how to twist the knife.

At this point, Jobs gets even more ranty. He says that new tablets will have “near zero” applications when they launch, compared to the iPad’s 35,000 native apps. “Our potential competitors can’t even come close to our pricing,” he continued. “Manufacturers will learn the painful lesson that their tablets are too small.”

Jobs rarely shows up for earnings calls, so his presence was a surprise. But even more surprising was how spirited he was in defense of Apple’s platforms. What’s funny is that he didn’t spend much time on Microsoft’s upcoming Windows Phone 7 platform — which means he either doesn’t consider it a threat, or he’s avoiding Microsoft criticisms for some reason.