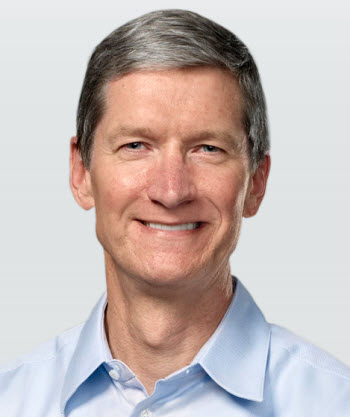 They are the biggest of shoes to fill. Tim Cook is taking over as CEO of Apple. It’s the beginning of a new era in technology, as his predecessor Steve Jobs has been a dominating presence for everything associated with Apple. And Apple has defined some of the biggest changes in the history of technology.

Jobs is the visionary who pulled together groundbreaking products such as the iPhone, the iPad and the MacBook Air. On stage, Jobs is the public face of the company who waxes eloquently about how Apple creates products at the “intersection of technology and the liberal arts.”

Cook, on the other hand, is a logistics and operations wizard. He isn’t nearly as charismatic of a speaker. In his career, his strength has been handling the nuts and bolts of running a big company, like making sure the company has enough memory chips on hand. The 50-year-old grew up in Robertsdale, Ala., the son of a retired shipyard worker. He is described as quiet, calm and unflappable.

Apple’s stock has understandably tanked in after hours trading, down 5 percent. But Cook has the full confidence of both Jobs and the board of directors, since this is now the third time that Cook has taken over as Apple’s top boss. Though his previous appointments as CEO were temporary due to Jobs’ illnesses. Cook ran Apple for two weeks in 2004 when Jobs was recovering from pancreatic cancer surgery. He became chief operating officer in 2005 and stepped in to run Apple for six months in 2009 when Jobs had a liver transplant. During that period, Apple stock rose 67 percent.

“As far as my successor goes, I strongly recommend that we execute our succession plan and name Tim Cook as CEO of Apple,” said Steve Jobs in his letter to the board of directors.

Meanwhile, Art Levinson, a board member and chairman of Genentech, said in a statement, “The Board has complete confidence that Tim is the right person to be our next CEO. Tim’s 13 years of service to Apple have been marked by outstanding performance, and he has demonstrated remarkable talent and sound judgment in everything he does.”

Cook has been responsible for all of Apple’s worldwide sales and operations. He managed Apple’s supply chain, sales activities, service and support in all markets and territories. He also headed Apple’s Macintosh division and played a role in the development of strategic reseller and supplier relationships. That means he had to arrange for multi-year supplies of memory chips and displays with giants such as Korea’s Samsung.

Before he joined Apple, Cook was vice president of corporate materials for Compaq. He also served as the chief operating officer of the reseller division at Intelligent Electronics. He also spent 12 years at IBM as director of North American fultiflment, where he led manufacturing and distribution functions. He has an MBA from Duke University and a bachelors degree in industrial engineering from Auburn University.

Stories on Cook have been plentiful in recent years, mainly because he appeared to have been the top successor. Gawker called him “the most powerful gay man in Silicon Valley.” In that story, Gawker described Cook as emailing his underlings starting at 4:30 am each morning. He devours energy bars during meetings and is often the first into the office and the last one out. Cook once dispatched an Apple employee to leave a meeting at the Cupertino office and head to China to go fix a problem.

“Why are you still here?” was Cook’s goodbye, delivered in the middle of the meeting.

Cook joined Apple in 1998, shortly after Jobs returned to Apple and replaced failed CEO Gil Amelio. Jobs reportedly had nixed a former Compaq executive within five minutes of starting a job interview. But Cook seemed like someone who couldn’t be unhinged by Jobs.

Cook clearly has the support of most of his employees, at least in terms of his ability to keep Apple on track in the near term. But the next big turning point in technology is going to be a challenge for Cook to spot.

“I think Tim is an OK replacement,” said one Apple employee who spoke to VentureBeat, on condition that he not be identified. “He seems to have some vision, which is what the position really needs. It is always hard replacing a benevolent dictator.”