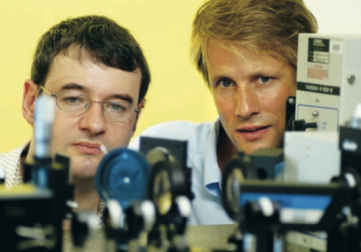 Applied Materials is in the middle of restructuring its solar strategy. It recently called it quits on its SunFab line of equipment for thin-film solar cell manufacturing, cutting 500 jobs in the process. But now it’s sinking money into a new business : solar inspection and quality control. The company’s investment arm, Applied Ventures, joined a $3.8 million first round of funding for BT Imaging, a startup that does just that.

The core of BT’s business is its photoluminescence technology, which makes it possible to electronically inspect mass amounts of solar wafers and cells on an individual basis as they make their way down the assembly line. Lasers are used to illuminate the material and the light is captured by a specialized camera — dark parts of the wafers and cells will not produce as much electricity. The process ensures high efficiencies and manufacturing yields — essentially lowering bottom-line costs for photovoltaic makers.

Initially, BT only offered a suite of tools for crystalline silicon wafer and cell testing. According to Greentech Media, Applied Materials started taking an interest in the company after it introduced equipment that could be used during assembly line operations. Now wafers and cells that don’t pass muster can immediately be recycled.

This sounds incredibly useful for major solar makers — a group that includes Applied Materials, especially considering both companies’ emphasis on silicon photovoltaics. But Australia-based BT is still a young company. It’s only sold about 20 of its in-line systems, GTM reports, and is gearing up to launch tools capable of inspected 3,600 wafers an hour next month.

In addition to Applied, which took an equity stake in BT, investors Uniseed and Allen & Buckeridge also participated in the recent round of funding.