The costs of advertising to get mobile users to install apps is high in the U.S., but Asian countries are catching up, according to the third annual Mobile In-App Ad Monetization performance index from Appodeal.

In a 54-page report, Appodeal, a division of Stack, analyzed the latest data that can give insights for mobile app publishers on the top earning mobile ad networks, ad exchanges, and other things.

Here are the top six key insights listed by Appodeal.

Asia catching up to U.S.

The U.S. market’s eCPMs (effective cost per 1,000 impressions, a measure of advertising costs) remained top in most ad formats, with East Asia and Australia catching up. For rewarded videos on iOS, the U.S. reached an eCPM average of $15.82, followed by China, Taiwan, Japan, and Australia, with eCPMs ranging from $11.86 to $13.65. 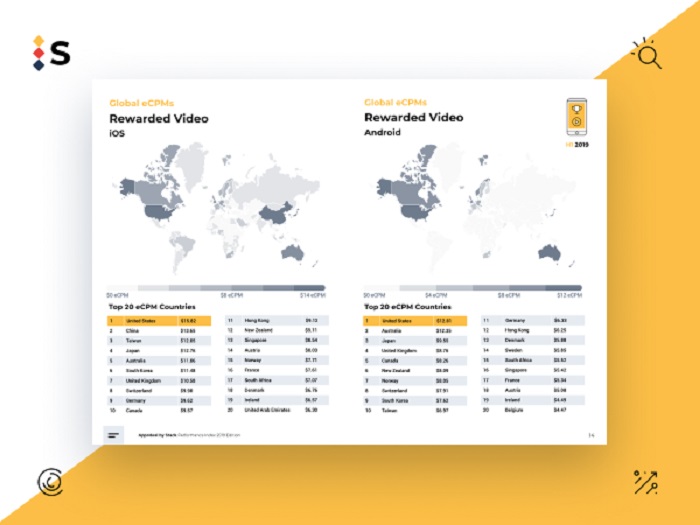 Rewarded videos’ eCPMs continued to climb up but at a more modest pace than the previous year. For example, the U.S.’s rewarded videos on iOS and Android both saw their eCPM increased by 13% to a high average of $15.18 and $12.68 respectively from H2 2018 to H1 2019 compared to the same period the previous year. Some of the top-earning ad networks from the three regions analyzed for rewarded videos were AdMob, Facebook, AppLovin, Unity Ads, BidMachine, and MyTarget.

Interstitial ad costs up on Android in U.S. and Europe

Interstitials’ eCPMs increased significantly on Android in U.S. and Western Europe. Interstitials, which include static, video, and playable variants, showed impressive eCPM growth on Android by 27% to an average of $6.35 in the U.S. and by 21% to an average of $2.38 in Western Europe from H2 2018 to H1 2019 compared to the same period the previous year. Some of the top-earning ad networks for interstitials were AdMob, Facebook, AppLovin, Unity Ads, BidMachine, Ogury, and Yandex.

Banners still matter for revenues, but on the decline

Banner ads were still important for the revenue base, but their eCPMs showed signs of decline. Banners accounted for around a quarter of the ad revenue share. However, on Android in Western Europe, the category’s eCPMs decreased by 27% to an average of $0.16 from H2 2018 to H1 2019 compared to the same period the previous year, and decreased by 15% on iOS over the same period. Interestingly, in the U.S. its eCPMs actually increased by 13% to an average of $0.62 on iOS. Some of the top-earning ad networks for banners were AdMob, MoPub, BidMachine, Amazon Ads, AppLovin, Yandex, and MyTarget.

The index draws analysis from the eCPM performance of more than 150 billion ad impressions delivered globally through Appodeal’s ad mediation of 60-plus ad demand sources in over 40,000 apps during the first half of 2019.

San Francisco-based Appodeal is one of the ad monetization products of Stack.