The New York startup launched last September at the TechCrunch40 conference, and chief executive Cyrus Massoumi says growth has been climbing at an average rate of around 50 percent per month since then, both in terms of users and doctors. There are now 90,000 appointments available on the site, and 35,000 patients have used ZocDoc in the last 30 days.

So far, the service has been limited to New York, but Massoumi says the new backing should help it grow more quickly, both by adding more specialties and moving into new geographic areas. In the short-term that means expanding into New York’s neighbors, including parts of Connecticut and New Jersey; in a year or so, Massoumi says he’d like to start planting seeds — i.e. open the service –in other metropolitan areas. The greatest demand from site visitors is for service in Washington, D.C. and San Francisco. 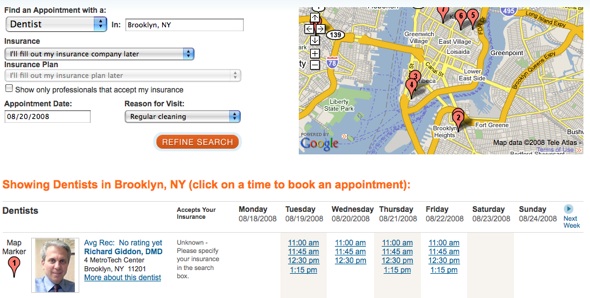 There are other medical directories out there, including the recently launched Google Health, but Massoumi says ZocDoc is the only one that lets you actually schedule appointments through the site.

At first, I wasn’t certain why patients would need this kind of thing. Is it really that hard to pick up the phone, especially when you only see doctors, dentists and other medical specialists every few months? But I’ve been lucky for the last few years, and all of my medical experiences have been best-case scenarios. As Massoumi points out, things can be a little tougher when you need to find a doctor right away, or if you don’t have time to call during regular business hours, or if you’re trying to see a doctor on the weekend or the holidays. That’s the advantage of searching ZocDoc’s large database and finding available appointments on the site whenever it’s convenient for you.

This is ZocDoc’s first round of funding, and it’s impressive despite being relatively small. Khosla is a recognized name in VC. In this case, he’s expanding beyond cleantech, the area he’s been focusing on.