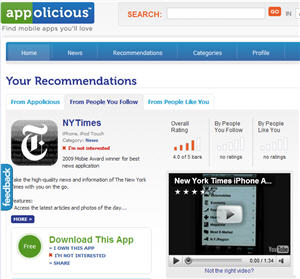 Apple just doesn’t seem that interested in social networks. The iPhone App Store has Top 10 lists for various categories of apps, but it doesn’t let customers see which apps their friends, family and coworkers like or don’t like. The store, for example hasn’t figured out that I have no interest in games, based on the apps I’ve downloaded.

Appolicious, an app site launched this morning, does just that. “We let you see the apps your friends have downloaded, with reviews written by your friends,” founder Alan Warms told me in a phone interview. The site also calculates which of its other members it thinks you have a lot in common with — they’re dubbed “People Like You” — and shows you their downloads and writeups, too.

The site has a reassuringly familiar social network look and feel to it. The interface is busy, but you’ll recognize the components. For now, it sticks to iPhone / iPod Touch apps, where most of the action is. “We’re layering on features not available from Apple,” Warms said. “We allow developers to list apps before they’re approved. We aggregate news about each app. We can host video demos of apps on site, no need to chase them around the Net. We’re working with developers on metrics from Appolicious that go beyond what’s in the store.”

It’s too soon to seriously evaluate Appolicious, since what matters will be the richness of the network that users will create over the next few weeks.

Where’s the part where Warms gets paid? “We’re looking at different revenue models right now,” he said. Then we both laughed out loud. To be serious, he thinks performance-based cost-per-click ads from app makers will be the most likely payoff. “Just look at all the free apps,” he said. “They’re free because it’s worth it for companies to get their app onto your device. They’ll pay to make that happen.”