Apple’s change in the use of the Identifier for Advertisers, known as IDFA, has left mobile marketers in a state of confusion and concern over how the retirement of the tracking technology will affect targeted advertising.

That’s the result of a survey by mobile measurement firm AppsFlyer and the Mobile Marketing Association (MMA). Seventy-four percent of marketers expect a negative financial impact from the IDFA changes. They expect to lose identifying information on 50% of consumers under the new opt-in rules, which ask consumers if they want to be tracked.

“One of the key points is really the high level of uncertainty. And the fact that people know that something is going on,” said Jasper Radeke, senior director of marketing for North America at AppsFlyer, said in an interview with GamesBeat. “It’s not 100% fear. People are waiting until the privacy changes are being implemented and people know something is happening. Some people are very familiar with it, and some are uncertain.”

In June, Apple said that iOS 14 would have new privacy features that would require consumers to opt-in for permission to be tracked, and that those who don’t will no longer be targeted by advertisements that use the IDFA.

Apple delayed the enforcement of the new rule in September, saying it would instead allow the mobile app ecosystem — including mobile game developers who generated billions of dollars a year on iOS — more time to adjust. Apple will enforce the rule in early 2021, and it has offered its SKAd Network as a way to measure advertising results in a less granular manner. 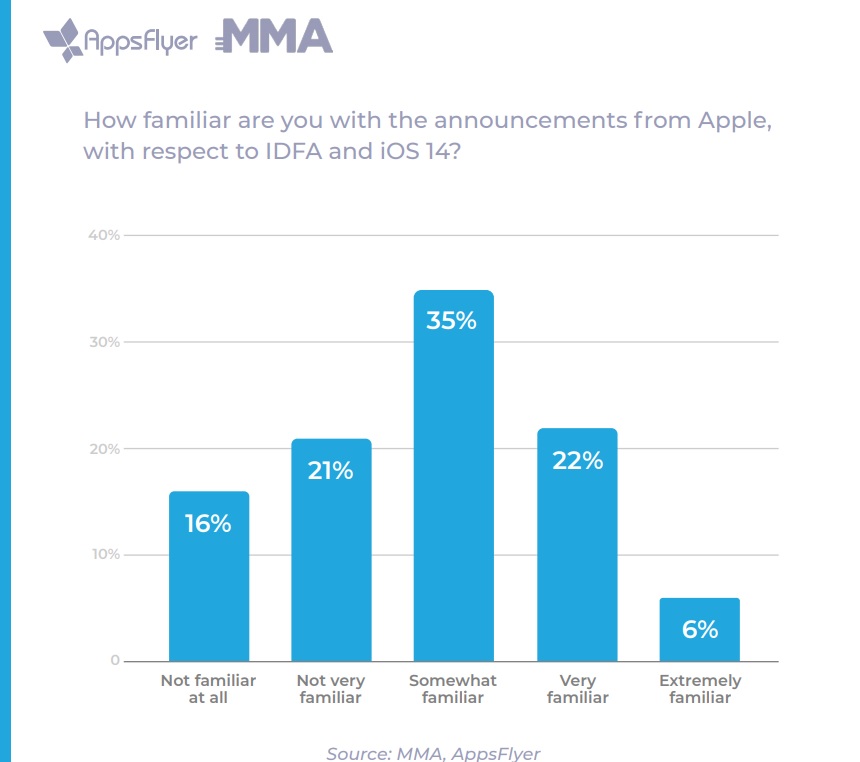 Above: Mobile marketers are confused by Apple’s IDFA change.

The report found 74% of marketers agree that publishers will suffer revenue losses. And 19% of advertisers likely to shift ad spending within mobile, while 33% likely to reduce mobile ad spend.

SKAdNetwork isn’t seen as a good way to measure results. Only a third of marketers said they were somewhat to very likely to adopt SKAdNetwork, with 46% of marketers unsure whether they will adopt Apple’s solution.

About 21% of marketers expressed confidence about their capability to continue to use deterministic identifiers for measurement, either by using alternative identifiers like emails, or by finding new strategies to obtain permission to access the IDFA, such as by providing incentives. (Apple has said you can’t offer rewards in exchange for people giving up their privacy).

The industry has to adapt to Apple’s IDFA change, but respondents also acknowledged that it is part of a larger turn toward consumer privacy dictated by General Data Protection Regulation in Europe and California’s new privacy law in the U.S.

Above: AppsFlyer measured the impact of IDFA changes on marketing.

Google will most likely jump on the bandwagon, as 80% of marketers find it somewhat, to extremely likely, that other mobile operating systems, such as Android, will enforce similar “opt-in” approaches when it comes to identifiers.

Anticipating this, 71% said they somewhat trust probabilistic data (where the marketer makes its best guess about the behavior of the consumer) for audience targeting and 70% trust it somewhat for measurement and attribution.

The survey was conducted in September across MMA’s 800 member companies with 171 responses from those with manager titles or above.

Karen Cohen, senior director of product marketing at AppsFlyer, said in an interview with GamesBeat, said that when prompted whether they want to be tracked, more than 90% of people say they don’t want to be tracked.

“Things are moving pretty fast overall so it’s important to stay on top of the topic. But as of now, is we’re not aware of [anything new],” Cohen said.