Today AppStats is launching a new window on who’s winning and who’s losing in Facebook apps. The app analytics site, created by Berlin-based newsmag Social Games Observer, reveals which apps and developers are growing audience, and which are shrinking.

In a statement, chief executive Sebastian Sujka said that Social Games Observer launched AppStats for two specific purposes: “to break the Appdata monopoly and to improve the industry standard.” AppData, part of Inside Network,  is currently the industry leader, and has been in operation since 2008.

Anyone can use AppStats to see the top games and apps in use on Facebook, as well as the top developers. For example, in the last month, Zynga’s Texas HoldEm Poker is the top game, with 35,200,000 monthly average users, followed closely by Zynga’s other top titles: CityVille, Draw Something, FarmVille, and CastleVille. King.com’s intriguingly-titled Bubble Witch Saga is the closest non-Z-contender, pulling up in sixth with 20.5 million monthly users.

In addition, AppStats features a developer leaderboard, which reveals that Yahoo! is today’s biggest gainer, with an increase of 1.8 million users. The comparison module is a helpful feature, showing that while Zynga has been gradually shedding users over the past month, King.com is very slowly adding:

Facebook app stats packages are essential for app developers, marketers, and social media observers. But since Facebook is so ubiquitous, with close to a billion users, it can also be used as a proxy for other types of data. Take the below graph, which provides interesting insights into phone platforms: 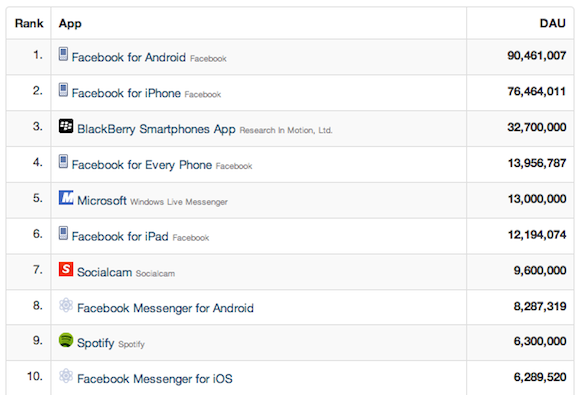 Clearly, while Android and iPhone are vying for the smartphone lead among Facebook users, BlackBerry is not dead yet and neither are plain old feature phones. Meanwhile, Windows Phone is nowhere to be found.

While established market leader AppData suggests that it uses information provided by Facebook to track over 75,000 Facebook apps and create its leaderboards, Sujka told VentureBeat that AppStats pulls data from the Facebook graph, “the same way Appdata is getting their data.” To distinguish the service, however, AppStats has redefined “all game categories and sorted all games accordingly for a very precise search.” As a result, Social Games Observer claims to be  “the most reliable and comprehensive Facebook application metrics database.” 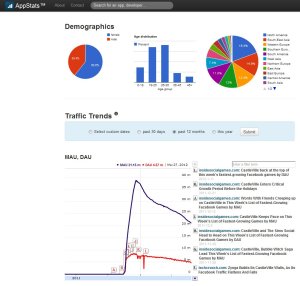 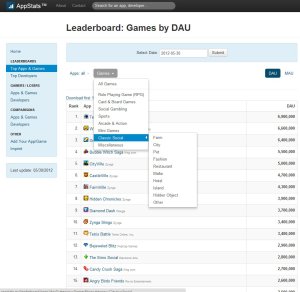 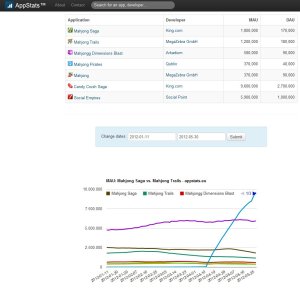 (This story was updated June 4, at 8AM PST: the AppStats website initially said “a most reliable,” but that was a typo. It has been edited to “the most reliable.”)