The augmented reality ecosystem continued to grow in the first half of 2018, with the number of AR companies having grown 50 percent to 290 since the end of 2017, according to investor The Venture Reality Fund.

Propped up by Magic Leap’s impressive and almost crazy ability to raise money, the AR market has continued to prosper from steady new investment. But Tipatat Chennavasin, general partner at The VR Fund, said in an interview with GamesBeat that investment activity grew across all sectors of the AR landscape in the first half, even if you factor out Magic Leap’s ability to raise so much money.

A year ago, The VR Fund was tracking 150 AR companies, and that number grew to about 200 by the end of 2017. Those companies are developing infrastructure, tools, platforms, applications, and content for the AR ecosystem, and Chennavasin said the sector remains healthy on a global basis.

“The 50 percent growth refers to the number of companies, not only among startups getting investments, but large companies entering the market,” he said.

He also said that virtual reality, which has struggled to gain a consumer audience, continues to get investments, as well. So far this year, the AR and VR companies have raised more than $1 billion, Chennavasin said. 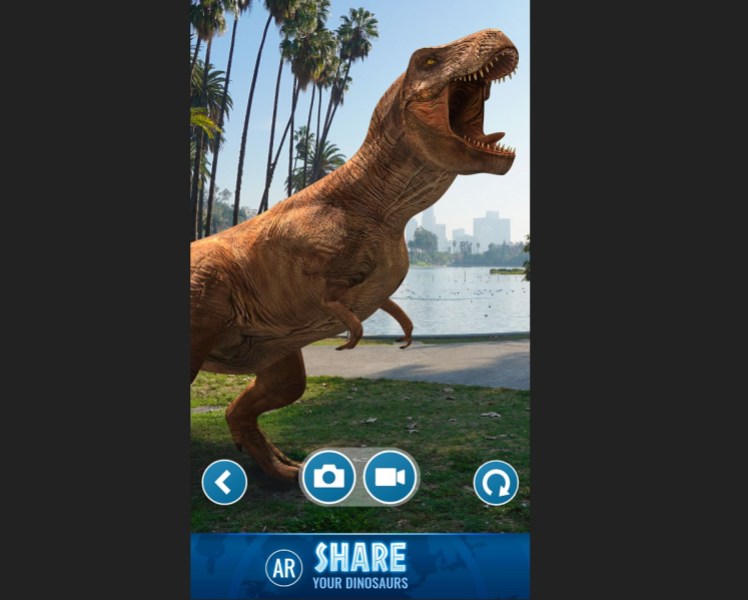 Above: Jurassic World Alive lets you find dinosaurs in the real world.

“And with major companies like Apple, Google, Facebook, and Snap leading the charge for mobile AR, developers and investors have taken notice,” he said.

The first half of 2018 reveals the most substantial growth in apps and content targeting mobile phone-based AR platforms from Apple and Google. The mobile AR ecosystem has seen more than 13 million app downloads, but not much consumer success yet beyond Pokémon Go and potentially Jurassic World Alive. Pokémon Go has generated $1.8 billion in two years.

“Those outliers are strong, but we have not seen major successes yet,” Chennavasin said. “Social AR is doing well, like on platforms like Snap.”

Chennavasin believes significant investment in infrastructure technology, like AR cloud technology, has been about unlocking those richer social experiences.

The VR Fund evaluated more than 4,000 companies, and those selected in its visual landscape meet a certain criteria of funding, revenue, mainstream coverage, and/or major partnerships.

The fund found that the majority of growth was in consumer apps for mobile AR, but there was notable growth in all categories — such as AR smart glasses, 3D tools, SDKs, enterprise applications, and display components for AR head-mounted displays.

Before raising an undisclosed amount of money from AT&T on Wednesday, Florida-based Magic Leap, which is creating the Magic Leap One AR glasses, had raised $2.3 billion. But even if you factor that out, Chennavasin said that investments in AR have held steady in the hundreds of millions of dollars, which is why the number of companies in the ecosystem continues to expand.

For mixed reality HMDs, Magic Leap developer kits are now in the hands of certain developers, and the next version of the Microsoft HoloLens developer kit is rumored to be launchin in early 2019. There is still no announcement as to when any consumer MR HMD will ship.

Conventional wisdom says that VR investment is dropping because of slow consumer sales, and AR is rising. But Chennavasin said VR continues to be strong, as evidenced by ongoing investments — like Penrose Studios raising $10 million — and big companies continuing to show support for VR.