Magic Leap has raised an astounding $1.4 billion for its augmented reality smartglasses since 2014. But the company has run into considerable negative publicity lately, including a leaked photo that showed that the technology might be further behind than its CEO has claimed.

The negativity started in December when tech news site The Information said that Magic Leap executives overstated the quality and readiness of their AR device and that the prototype is inferior to those from rivals such as Microsoft and its HoloLens project. And on Friday, Business Insider published a leaked photo that showed the technology could be very bulky. 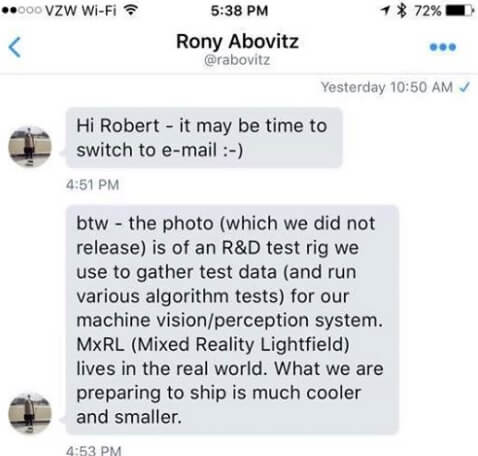 Rony Abovitz, the CEO of Magic Leap in Florida, said on Twitter that the photo was “not what you think it is.”

Our own reporting shows that at least one high-level source has worries about the Magic Leap project. Our source asked to remain anonymous.

Magic Leap has something like 1,200 employees, and the risk is that some of these workers might leave if the technology falls short of its goals.

“They are scattered so thin,” our source said. “They are doing 1,000 things badly. They should be doing three or four things really well. Magic Leap is not as good as HoloLens, and it’s two years later. It won’t be as good when it ships.”

Business Insider said that Magic Leap was working to finish a prototype before an important board meeting this week.

Richard Windsor, an analyst at Edison Investment Research who has followed AR/enterprise companies for a long time, said in a statement today:

While Magic Leap is capable of producing an augmented reality (AR) experience that far outstrips anything its peers are offering, it is years away from fitting that technology into anything that a consumer will tolerate. The latest leak from Magic Leap shows a unit that is clearly a development board in a clear plastic box powered with an external battery pack and a fairly large head unit which is reported to be the latest prototype called PEQ, product equivalent.

The company will be presenting the prototype to its board and investors this week, all of whom will be looking for results from the $1.39 billion raised so far….There appear to be problems with the core fibre optic technology that has led to the company having to redesign elements of its offering to make it smaller. Suppliers have described conversations with Magic Leap engineers that strongly imply that some parts of the system are not even past the concept stage.

Silicon Valley chatter also highlights the possibility of infighting between the Silicon Valley operations and the mothership in Florida as well as some high-level departures and very short senior tenures. The key to understanding what is happening at Magic Leap comes from Rony Abovitz himself who describes his prototypes as being in ‘agile build cycles.’

This means that the hardware and software design and specification of the PEQ product, that Magic Leap intends to launch, are far from being locked down. Consequently, there is no point whatsoever in spending a fortune trying to miniaturize the hardware as all that investment would be wasted if something has to be changed. We suspect Magic Leap has been forced by the pressure to start generating revenues into producing a compromised product.

That compromised product would be too bulky to wear, he said.

“Magic Leap is very far away from producing the kind of product with which it could take the AR market by storm. We do not think that this is a problem as almost all of its competitors are looking to sell their units to enterprises where the user experience is much less important,” Windsor said.

We also heard from our own source that the Magic Leap prototype uses a Nvidia Parker processor, a new version of that company’s Tegra mobile processor series. The source said that developers do not have the necessary hardware to begin making Magic Leap software, and that means it will be hard to ship Magic Leap with any applications this year. And if Magic Leap doesn’t ship for a while, its burn rate could be scary.

If Magic Leap can’t deliver, it could be embarrassing for investors such as Alibaba and Google. Magic Leap raised $793 million in its most recent round from those and other investors in early 2016. Apparently, Magic Leap wowed those investors and others based on simulations of high-quality imagery possible with Magic Leap’s AR technology. The Information said that the imagery was created by a special effects studio.

To all the @magicleap fans: we will not let you down. Back to heads down mode so we can finish and ship :-)