Augmented reality may be the future of games, but there are some huge problems that stand in its way. So we decided to gather three of the biggest AR visionaries and product makers to show us the path to the future at our GamesBeat Summit 2017 event last week.

They are all unabashed fans of science fiction, and yet they have to deal with the realities of where technology is. Still, we asked them to speculate about the future of things, from privacy issues of augmented reality to what Pokemon Go 10 could be like.

Osterhout is a developer, designer and entrepreneur. In his career, he has developed over 2,000 different products and hundreds of separate product lines for companies ranging from startups to Fortune 500s, as well as the government. He founded ODG in 1999, after several decades founding, building, and selling companies in consumer products, sporting goods, defense contracting, personal electronics, and high tech toys. Ralph has over 250 U.S. patents and applications to his name and more than two decades working with head-worn displays. He was the designer of the PVS7 Night Vision Goggles and heads-up displays in scuba masks.

But he still can’t make AR glasses with awesome visuals for just $500. 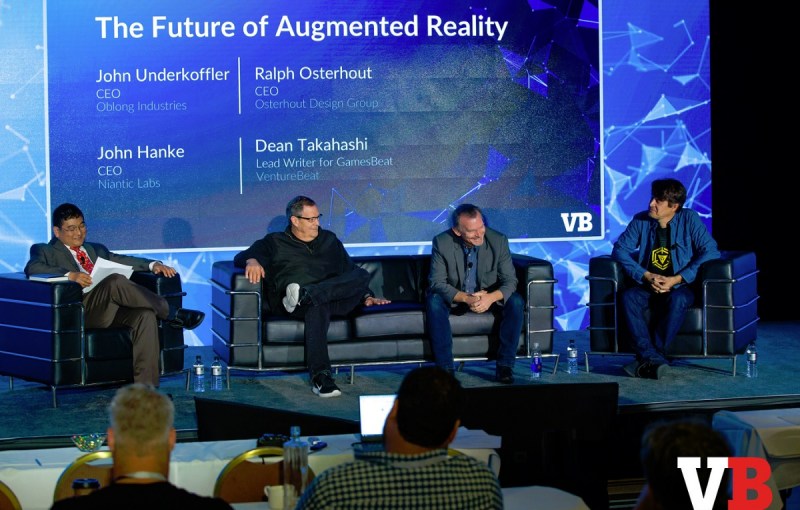 Underkoffler has been trying to make the vision of the 2002 film Minority Report, where actor Tom Cruise uses “data gloves” and gestures to control a transparent computer, into a reality. He founded Oblong in 2006, and launched Mezzanine for enterprise collaborators in 2012. Oblong’s technological and design trajectories build on 15 years of foundational work at the MIT Media Lab, where Underkoffler was responsible for innovations in real-time computer graphics systems, optical and electronic holography, large-scale visualization techniques, and the I/O Bulb and Luminous Room systems.

Hanke has been running Niantic and riding the rocket ship of Pokémon Go, which has more than 65 million monthly active users and has generated more than $1 billion in revenue in less than a year. His company is dedicated to building “real world” mobile gaming experiences that foster exploration, exercise and social interaction. Niantic has developed and released two games, Ingress and global phenomenon Pokémon Go. The company was originally founded as a startup within Google to explore the creation of new kinds of entertainment at the intersection of location, social, and emerging mobile devices. Niantic was spun out as an independent company in 2015 with backing from investors such as Google, Nintendo, and The Pokémon Company.

Earlier in his career, Hanke was a founder of Archetype Interactive, creators of one of the very first online massively multiplayer games, Meridian59, and then went on to cofound Keyhole, a company acquired by Google for the technology that lead to the creation of Google Earth. He was vice president of Google’s Geo division (overseeing projects including Maps and Street View) for seven years before founding Niantic. He has also been waiting a long time for the tech to mature.

“Hollywood gave us Hal (the talking computer from 2001: A Space Odyssey), and we got the TRS-80 (the ancient text-based computer system),” Hanke said.