Some in the AR/VR industry see it converging into a singularity of spatial computing in one magical device, but mobile AR, smartglasses and VR could actually diverge in the medium-term (at least commercially). 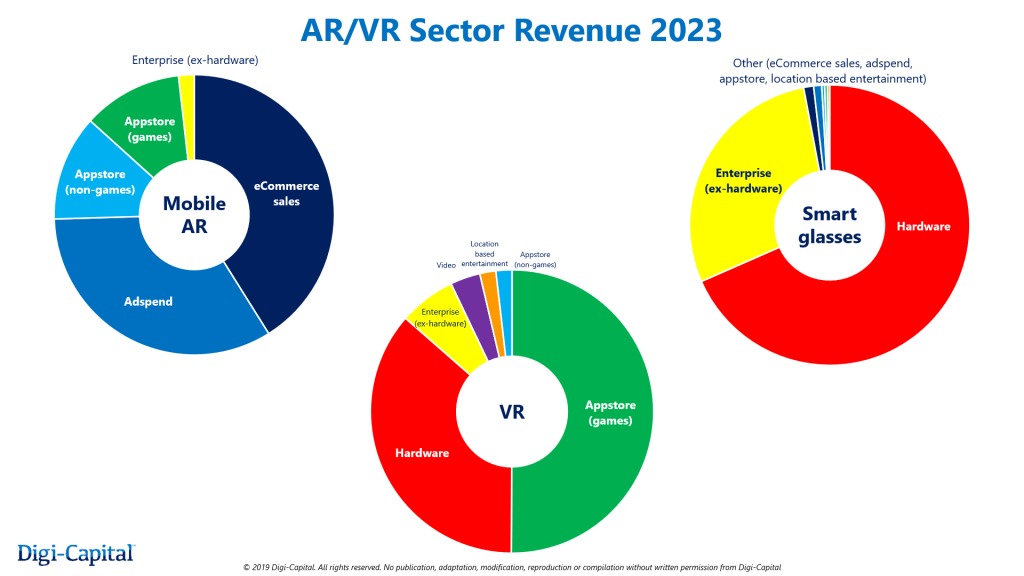 Sources: Digi-Capital AR/VR Analytics Platform and Augmented/Virtual Reality Report (note: free chart does not include numbers, axes and data from subscriber version, with underlying data sourced directly from companies and reliable secondary sources. Methodology is discussed in the report.)

Mobile AR looks like the medium-term mass-market for AR/VR, with over 850 million installed base at the end of last year, and a Digi-Capital forecast over 2.5 billion by 2023 (ARKit, ARCore, Facebook Spark AR, Snapchat Lens Studio, web AR etc.). Being a free software platform on ubiquitous smartphones has natural advantages. (Note: mobile AR installed base is compatible/configured devices, not active users — a lower number.)

The challenge for mobile AR is critical use cases, to transform user experience in a way that users care about and that couldn’t be done any other way. Pokémon Go, messaging filters and Google Maps are a start, but additional critical use cases are needed.

Mobile AR app store revenue from both in-app purchases and premium apps could remain a major driver long-term. Although dominated by games like Pokémon Go today, Digi-Capital forecasts non-games apps in the 20-plus other app categories taking over half of mobile AR app store revenue by 2023. Enterprise mobile AR software/services could also be part of the long-term mix.

Smartglasses have largely been enterprise focused, with short-term installed bases in the tens of thousands (e.g. Vuzix, Google Glass Enterprise Edition) to hundreds of thousands (Microsoft HoloLens 2 with its 100,000 unit US Army contract). Digi-Capital forecasts enterprise smartglasses scaling to millions of users by 2023, driven by Microsoft, Google and a range of startups. Magic Leap is creator/developer and enterprise focused today, with its consumer play a medium-term prospect.

Digi-Capital first forecast Apple launching smartphone-tethered smartglasses in late 2020 over 3 years ago, but only Tim Cook and his inner circle really know if and when that could happen and what it might look like. If they launch as a premium smartphone peripheral, not everyone is happy to pay for or carry two devices, as with the Apple Watch). Apple could still sell several tens of millions of units to early-adopter consumers by 2023, which might also drive bring-your-own-device enterprise demand. Standalone smartglasses as a mass-consumer smartphone replacement look like they’re further out.

Mass-consumer revenue streams like the app store, ecommerce sales, and adspend need hundreds of millions to billions of users to scale, which doesn’t look like the smartglasses market for now. So smartglasses’ primary revenue drivers could remain hardware sales and enterprise software/services medium-term.

VR for early-adopter consumers and enterprise

VR had less than 20 million mobile and console/PC-tethered VR installed base in 2018, with modest sales in the millions and relatively high attrition rates. Facebook’s premium-standalone VR Oculus Quest could sell towards 1 million devices this year, primarily to early adopter gamers (Quest costs $100 to $200 more than the competing Nintendo Switch games console, and friends need two or more headsets to play together in VR, unlike Switch in non-VR mode). The market’s inflection point might need a second generation of premium-standalone VR around 2020/2021, with greater performance, better content and lower prices to scale.

VR makes most of its money from hardware sales and games/entertainment, with enterprise software/services a growing part of the mix. While VR is still exploring other use cases, after three years this could remain VR’s commercial path.

One platform to rule them all

The long-term promises a grand, unified AR/VR platform, but for now we’ve got three quite different ones (again commercially). But divergence is a good thing in early-stage markets, as it leaves time for the next generation of tech-giants to emerge.

Tim Merel is Managing Director of Silicon Valley AR/VR adviser Digi-Capital, and will be presenting more detail in his keynote at AWE 2019 on May 29th, as well as highlights from AWE/Digi-Capital’s AR/VR Global Industry Survey – participate here to get the survey report and win prizes.