In Silicon Valley, no one seems to care too much about appearances.

Walk into a venture capitalist’s office on Sand Hill Road wearing a suit and tie, and you’ll look like you’re trying too hard. For all its wealth, the region still resembles suburbia; it’s replete with strip malls, car dealerships, and tree-lined Main Streets.

But now that’s changing, with Silicon Valley’s tech tycoons taking a more active interest in their surroundings — specifically in architecture.

Facebook, Google and Apple have each commissioned well-known architects to design new office headquarters for them. 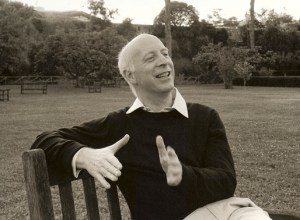 It all started three years ago with then Apple CEO Steve Jobs, who the architect Sir Norman Foster refers to as a “kindred spirit,” commissioned Foster to build a new office in Cupertino, Calif. Shortly after, Facebook chief executive Mark Zuckerberg hired the Canadian-American architect Frank Gehry, who is arguably the only living architect whose celebrity rivals Foster.

For an in-depth feature in this month’s issue of Vanity Fair, writer Paul Goldberger toured Facebook, Google and Apple, and met with executives to discuss plans for the new headquarters.

With the issue in the stands, I caught up with Goldberger to discuss how these imposing new buildings will change the landscape of Silicon Valley in 2014 and beyond.

VentureBeat: When did you first learn about Silicon Valley’s architectural ambitions?

Paul Goldberger: I pay attention to the work of Sir Norman Foster and learned early about the commission from Apple. I also knew about Frank Gehry and the Facebook project. It occurred to me that these two things together represented the beginnings of a change in Silicon Valley, which I’d always thought of as a place that looked more conventional than it truly was. The things that made it special were mostly invisible. But now, the tech companies are trying to make them visible.

VentureBeat: What did you discover through visits to the Facebook and Apple headquarters?

Goldberger: Apple has an aesthetic that is very distinct. This is a company that will go down in history for bringing high quality modern design to the mass market. The Apple offices even now look different from the rest of SiliconValley. Foster saw the world in a similar way to Jobs with his elegant minimalist aesthetic.

Meanwhile, Facebook was a natural match for Gehry. Facebook is funky and resembles early Gehry with its plywood and funny angles and exposed structures. According to Gehry, [Facebook CEO] Zuckerberg asked him, “Why would someone as famous as you want to bother with an office building in Menlo Park?” But Gehry saw this as an exciting opportunity and so much more than an office building.

VentureBeat: Did Facebook or Google ever consider relocating to San Francisco?

Goldberger: Not that I’ve heard. These really big companies are so invested in the Valley. They don’t really have a lot of choice about their location. Google has been interested in urban locations like it’s New York office, which is right in the middle of the city. That said, it’s interesting that these smaller startups are in the city. We’re seeing a migration with younger people wanting to live in San Francisco and work at companies like Twitter. I think that trend will continue.

VentureBeat: Will the architecture of these new buildings influence the culture, or vice versa?

Goldberger: In this case, it’s not creating a corporate culture. It’s reflecting it. Facebook looks very casual and playful inside, but you can’t get any illusions that people don’t work very much. It’s to make people work more and keep them happy. The corporate culture came first, and the building design second.

VentureBeat: To what extent were the chief executives of these companies personally involved in the design?

Goldberger: I do know that at Apple, Steve Jobs was more involved because he was so obsessive about design. He took an active role in the planning process, more so than the other CEOs. [Current Apple CEO] Tim Cook is involved now in a supervisory way. He endorsed what was going on when he could have changed it or cancelled the whole thing. [Design guru] Jonathan Ives obviously had some role at Apple, but I don’t think it’s a major one.

VentureBeat: When will these structures be completed?

Goldberger: In 2016, I believe. I have a lot of skepticism about the Apple building. I respect Foster’s work, but I’m not a huge fan of that building. After these buildings are completed, other companies in the area will likely follow suit, particularly as they will face competition for talent from San Francisco. In the near-term, it will change the appearance of Silicon Valley.