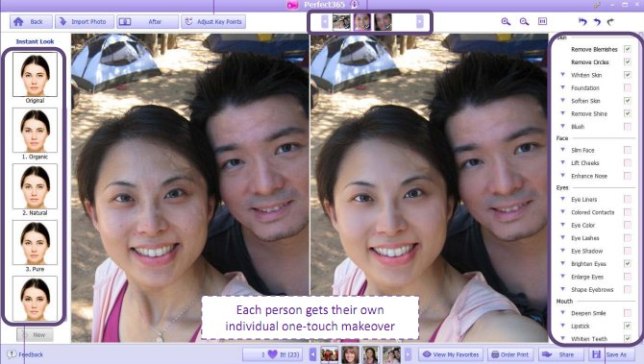 However you feel about the trend of airbrushed and Photoshopped magazine covers, sometimes we’d all like to make a few tweaks to our own portraits.

Up until now, making realistic photo edits was something only digital imaging professionals were meant to do. ArcSoft’s newest product, Perfect365, changes that by bringing intelligent and powerful portrait editing to the masses.

The software isn’t a traditional photo editor — instead it automatically detects faces in images and lets you make cosmetic changes, like removing a blemish or fading dark circles under your eyes. It also lets you add makeup, which could make it useful for testing out new looks. Perfect365 is cloud-based, so the more people use it, the better the software will get at detecting faces (this also means that offline, the software needs a bit more hand-holding).

ArcSoft has some 15 years of digital imaging experience, with its software helping to power editing tools in many digital cameras on the market. With Perfect365, the company wanted to deliver to consumers an easy to way touch up photos without much expertise, CEO Michael Deng told VentureBeat in an interview last week.

I took a look at both the iPad and Mac versions of Perfect 365, and both worked as advertised. While the interface is a bit rough, the software could end up being a very useful tool for those who don’t normally like having their picture taken. At the moment, the mobile version of Perfect365 can only detect a single face, but the company says it’s working on improving that.

I suspect the software will be particularly popular on smartphones, where consumers are taking plenty of self-portraits and snapshots, as well as on Facebook, which is now the largest photo sharing site on the web. The company says the Mac and Facebook versions of Perfect365 will be available before the end of the year.

The free Windows version of Perfect365 is available today, though it can only output lower quality photos. For higher resolution photos, you’ll have to pay $29.99 for the premium Windows version. iPhone and iPad apps are scheduled to be released later this month.