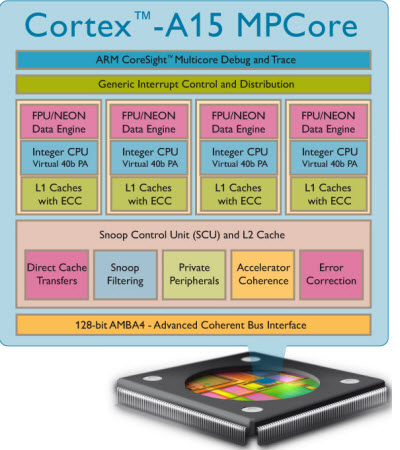 ARM is shaking up the world of smartphones and computers today as it unveils its design for a 2.5-gigahertz microprocessor that can be used in screaming-fast smartphones and tablet computers.

The performance of the Cortex A-15 MPCore processor will be about five times faster than today’s advanced smartphone processors. Cambridge, England-based ARM will develop the chip architecture which its licensees — Texas Instruments, Samsung, Qualcomm, Apple and others — will likely use in mobile processor chips. The news will put pressure on Intel, which is trying to break into the smartphone chip business with its Atom processors, which are low-power versions of its x86 standard processors for PCs.

ARM says the devices can be used in next-generation smartphones, tablets, large-screen mobile devices, and high-end digital home entertainment devices. The chips could also be used in enterprise infrastructure — i.e., servers, which usually use Intel chips — and wireless base stations. As such, they represent an opportunity for ARM to expand its presence in mobile devices, moving upward into a space occupied by rivals such as Intel and MIPS. 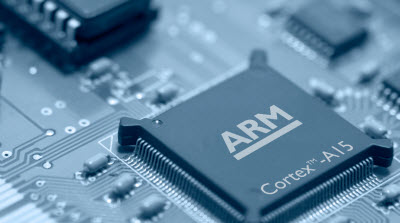 The Cortex A-15 processor is available for licensing today and is targeted at 32-nanometer manufacturing or future process technologies. The design has a lot of features that licensees can mix and match in their own custom designs. It runs a wide variety of operating systems and platforms, including Google Android, Adobe Flash, Java, Linux, Symbian, Ubuntu and Microsoft Windows embedded software.

The chip puts ARM in a good spot. It has always been the king when it comes to low-power devices, but its chips have never been brainiacs. They have been slower than other types of chips that consume more power. Without giving up on the power constraint, ARM has moved its performance up into the tier of fairly fast computing devices.

That’s going to result in products for consumers that will be much more appealing for their balance of battery life and the ability to run sophisticated programs, from 3D graphics games to multitasking mobile devices and high-definition video recording. The chip has ringing endorsements from ST-Ericsson, Samsung, Texas Instruments and others. Apple is a licensee of ARM’s and recently launched its 1-gigahertz A4 chip for the iPad and iPhone 4. You can bet that Apple will take advantage of this new chip design in future devices, but no announcement has been made on that yet.