(The Bridge) – Tokyo-based Aroma Bit, a Japanese startup developing a small-sized aroma sensor device, recently announced that it has appointed Batara Eto as an advisor and Atsushi Tanaka as a mentor.

Eto is the former CTO of Japanese gaming company of Mixi (TSE:2121) as well as the co-founder and managing partner of East Ventures. We were also told that East Ventures has invested an undisclosed sum in Aroma Bit. 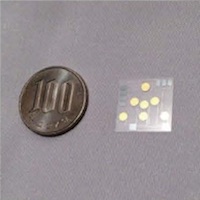 Tanaka is the former CFO of Japanese mobile company EMobile (acquired by Softbank in 2014) as well as the CEO of Tokyo-based JTOWER, a company focused on installing cellphone signal boosters in buildings to help mobile operators reduce the dead zones of their coverage.

Since its launch back in February 2014, Aomabit has been focused on developing a sensor visualizing the aroma and fragrance features. Quartz Crystal Modulator (QCM), their small-sized sensor, enables the visual expression of aromas, allowing users to ‘see’ scent differences between coffee, café latte, and honey latte, for example.

According to Aroma Bit CEO Shunichiro Kuroki, his company has been receiving many business inquiries from food, consumer electronics, automobile, and environmental businesses, where the quality check of their products typically relies on people’s nose but can be replaced with this sensing technology.