Our noses aren’t as good as they could be at smelling dangerous odors. So Aryballe Technologies has created a digital nose to do the sniffing for us.

Grenoble, France-based Aryballe showed its NeOse sniffing device at CES 2017, the big tech trade show in Las Vegas last week. The NeOse is aimed at industrial users who need to know quickly if a scent is a sign of a dangerous gas leak.

The device uses optical sensor technology to identify molecules, mainly by measuring them and how they interact with the sensor. The devices use surface plasmon resonance (SPR) prism techniques, which are used in a variety of biosensor applications and lab-on-a-chip sensors. The sensors are like nose receptors and can identify hundreds of different smells.

The tech was created by a team of scientists and entrepreneurs who want to develop a tech platform for new generations of universal sensors that can be adapted to different applications. To train the device to recognize a particular smell, the team has to expose it over and over. With time, it learns.

The company is developing the software and a database of smells so that it can better identify them. As the database gets bigger, the device gets better at recognizing smells it encounters. At the moment, it can detect one particular smell in an environment, or the global smell that is dominant.

At the moment, the technology is expensive, at $10,000 to $15,000. So the company is targeting enterprises at first. Over time, Aryballe hopes to create a consumer device. Such a device will be able to distinguish one perfume from another or discern a good peach from a rotten peach.

Perhaps one of the best uses is to see if deodorant is working. Right now, you have to sniff someone’s underarm to determine if their deodorant is holding up. That certainly sounds like a better job for a digital nose. 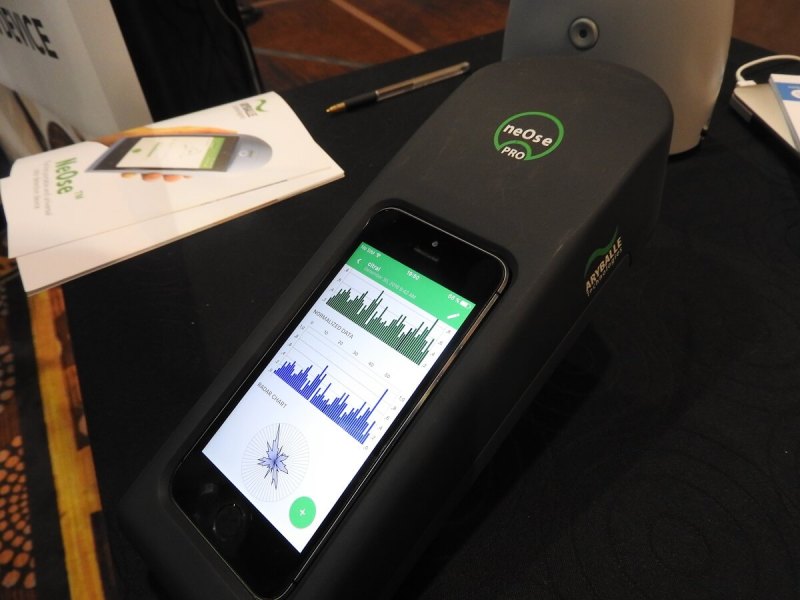 Above: NeOse Pro is aimed at industrial users who need a digital nose.