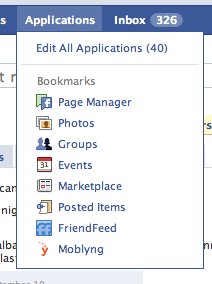 Facebook’s new design will begin to fully replace the old one today, although its not clear which users will be forced to use it, first. Until now, users could opt to use the old design, instead.

The company says that nearly a third of its 100 million monthly active users have already joined the new profile. Meanwhile, a series of protests groups have sprung up. The three largest ones that I’ve seen total 2.5 [Since I published a couple hours ago, the number has risen to 2.7] million users. You can check them out here, here and here.

[Update: On the developer front, Facebook has just introduced a new part of its interface where users can see the icons for applications in the lower left-hand side. It’s not done redesigning the new site, it says.]

While I’ve personally really liked the new profile — it helps me find interesting information faster, as it intends to do — I’ve also been concerned that this is not what most people care about. Most people seem to care about looking at profile pages, playing with apps, etc. As I wrote in June: “Is Facebook’s redesign aimed at Silicon Valley, not everywhere else?”

Facebook realizes that its long-term value lies in becoming an engaging social platform, because users will keep coming back to engage with applications and content. But that means Facebook actually has to observe and respond to what users want, versus its current modus operandi of telling them what they want. Facebook needs to facilitate development, heed user-feedback, and launch features based on that. That’s what Google does algorithmically with its search results, and after all, Facebook did at one point want to be the “next Google.”

But in spite of that aspiration, it seems that sometimes Facebook pays more attention to its publicity than user data, which is ironic since in doing so it is actually generating a lot of bad press.

In sum, Facebook is once again betting that it knows best. That worked with the news feeds, which also saw massive protests when introduced in 2006. Betting big didn’t work with Beacon, though, an advertising feature that showed you what your friends were doing on other sites. After a loud, press-driven outcry, Facebook pulled back on the feature without even rolling it all the way out.