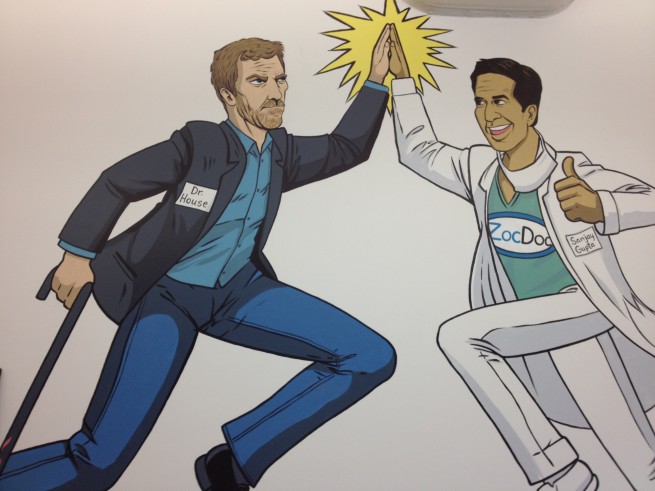 When Goldman Sachs invests in your startup, you know you’re onto something. ZocDoc, a startup that makes it easy to book doctor’s appointments, is one of the big success stories in New York, expanding rapidly to cities across the country and brandishing a real deal business model in which doctors pay to be listed on its network. Last week it launched in Detroit, its 17th U.S.market.

We stopped by ZocDoc’s Broadway office to chat with CEO and founder Cyrus Massoumi. We asked if ZocDoc had plans for all its great data. Massoumi shook his head. He says that, despite numerous inquires and invitations, ZocDoc has no plans to expand their business model right now. “We have one of the best lists of practicing physicians in the country right now. That is an incredibly valuable rolodex, and people are always asking us to partner with them on that data. But we believe our success comes from our single minded focus, and we’re sticking to that.”

When we asked about international expansion, Massoumi again shook his head. “There is plenty of demand in America. Right now there is already a crisis in terms of the number of available primary care doctors. Think about what will happen if the new healthcare laws go into effect, and 30 million new patients have insurance. Our mission is to make sure everyone in America can find a doctor quickly and easily, and we think there is still a lot of work to be done.”

Copycats are coming into the space. There are director competitors like Register Patient and spinoffs like Zeel, the ZocDoc for alternative medicine, that just raised a new round of funding and has expanded to 11 cities.

ZocDoc is expanding to new specialities and rapidly moving to new cities. “We crowdsource our expansion,” says Massoumi. “Patients and doctors who go to our site but don’t have service can vote to bring ZocDoc to their town. When we see enough demand, we move in.”

And of course, ZocDoc is going mobile to keep up with the shift to tablets and smartphones. “I tore my meniscus at the airport recently, getting in on a redeye at 2am,” says Massoumi. “I pulled up ZocDoc on my phone while waiting at the baggage claim and had an appointment with a specialist for 9am that same morning.”