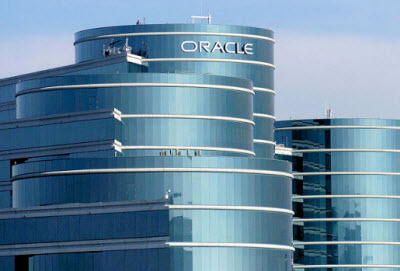 If there’s one tech company that is charging full-speed into the recovery, it’s Oracle. The company said today that profits for its third fiscal quarter ended Feb. 28 were up 78 percent to $2.1 billion, partly because Oracle is starting to get some benefit from its $7.4 billion acquisition of Sun Microsystems.

The company also raised its dividend by a penny a share, or 20 percent. It’s no surprise that the company’s stock price is up 2 percent in after-hours trading. Oracle is one of the giants of the database software industry, and its fortunes reflect the state of corporate tech buying. Its results show that a tech recovery is continuing.

Profit was $2.1 billion, or 54 cents a share, compared to $1.19 billion a year earlier. Revenue was $8.8 billion, up 37 percent from a year ago. Despite some concerns, Oracle said it doesn’t expect a big impact on its operations in Japan after the earthquake.

Oracle said that, excluding one-time items, its profits will be 69 to 73 cents a share in the current fourth quarter, topping the average 66 cents a share estimate from analysts. Revenue is expected to grow 9 to 13 percent to $10.4 billion to $10.7 billion. Oracle said sales were driven by new software licenses, a measure of brand-new business, as opposed to renewals by current customers. Hardware sales from the Sun deal were $1 billion.

Oracle continued to spar with rivals during its call. Yesterday, Oracle launched a spat with Intel and Hewlett-Packard, saying that Intel had plans to eventually shelve its Itanium chip architecture. HP said that was a “shameless” attempt to hurt demand for HP’s Itanium-based systems while bolstering Oracle’s Sun hardware and chip business. Oracle chief executive Larry Ellison was on jury duty, so President Safra Catz took a shot at HP. She said Oracle’s hardware business is showing a healthy margin and that Sun would deliver a $1.5 billion profit by fiscal year-end. That’s what Oracle promised with Sun, in contrast to HP’s acquisition of 3Par, Catz said.