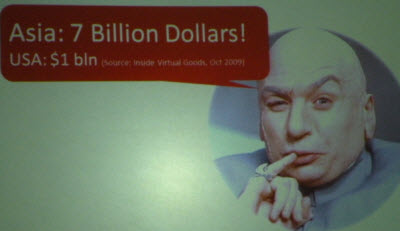 The virtual goods industry in Asia is generating about $7 billion a year in revenue, about seven times the number in the U.S.

The gulf is so large it is resulting in big valuation differences between Asia and North America. China’s nine largest publicly traded online game companies have a valuation of $52 billion, compared to just $22 billion for the top four North American and European companies, according to Ben Joffe, analyst at +8*, speaking at the Virtual Goods Summit in San Francisco today (pictured below).

The comparison is humbling, considering the hype around the rapid growth of the U.S. market. Virtual goods don’t exist in the real world. They’re digital bits such as weapons or character clothing in games. Game companies have figured out that they can offer consumers free games as an attraction, and a sizable percentage of those consumers will pay for virtual goods in small transaction amounts. One of the hottest markets is buying virtual goods to grow crops in farming games, as our story last night showed. 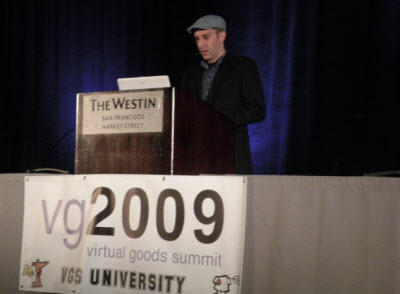 The virtual goods market took off in Asia first because they were a way to monetize online games, which were the only titles that took off in Asia because of retail game piracy. Online games couldn’t be easily copied because users had to authenticate themselves when they logged in. At first, subscriptions ruled, as they do with the biggest online fantasy role playing game, Activision Blizzard’s World of Warcraft. But now the virtual goods market has taken hold.

Asia was the first region where virtual goods topped $1 billion, with much of the action starting around 2005. South Korea’s Nexon was one of the first companies to pioneer the virtual goods business model in its online role-playing games, the most popular of which is MapleStory, which has more than 92 million registered users. In China, Tencent is expected to generate revenues of $1.5 billion to $2 billion from its QQ chat/game service, with most of that money coming from virtual goods revenue. China’s total market could generate over $5 billion in virtual goods revenue in 2009, Joffe said.

Japan also has a big virtual goods market. That country’s top three social networks are generating more than $1 billion in revenues, mostly through mobile games and services. In Japanese games, some rare virtual items are worth more than $1,000, due to their scarcity. More commonly, you can buy a rare virtual horse for $60. Korea, meanwhile, is generating about $1 billion in virtual goods revenue. 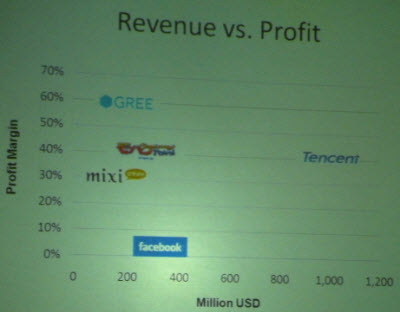 The names of the top Asian social networks companies are virtually unknown here. In China, the leaders are Tencent, Renren, Kaixin001, and 51.com. In Korea, it’s Cyworld. In Japan, it’s Mixi, Gree, Nani Suru, and DeNA. Many of those companies are making more money than U.S. social networks such as Facebook. The Asian companies are also moving into the U.S. The No. 7-ranked app developer on Facebook is 6Waves, a Hong Kong company that has created 104 applications.

For U.S. companies trying to make money in virtual goods, Joffe has a message: “Better hurry.” 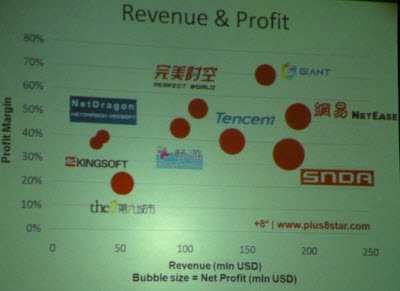