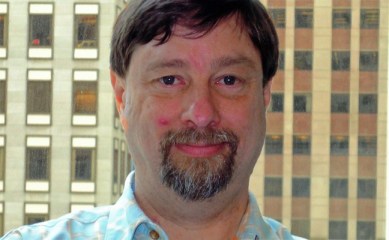 In the mid-1990s, technologist David Warthen (right) founded the quirky search engine Ask Jeeves, which used natural language search technology to guide users to one shining answer for whatever they wanted. Ask Jeeves was one of the dot-com era’s successful IPOs in 1999.

Barry Diller’s InterActive Corp bought the company in 2005 for $1.85 billion and renamed it Ask.com. Today, it is one of the top search sites traffic-wise, not far behind Google, Yahoo and Bing. Warthen moved on to other startups, most notably Answerbag, acquired by Demand Media in 2007.

Today, global citizen-journalism community site Allvoices announced that Warthen has joined the company as chief technology officer. “At Allvoices,” Warthen wrote in a prepared statement, “news itself is being redefined from a top-down editorially controlled activity to a bottom-up massively social activity, which includes coverage of many topics and perspectives that are ignored in the old model.”

Examples of the kind of journalism Warthen hopes to enable: Allvoices coverage from Somalia on the insurrection and on piracy of ships off the coast. Religious topics, such as local perspectives on the Catholic church scandals in the Philippines. And political topics like the story of Prisoner 650, about which opinions around the world vary widely from reports from US news agencies.

“Allvoices … is leading the transformation of the news industry toward citizen journalism by pushing the state-of-the-art in using self-regulating, scalable, and social technologies,” he wrote. Not everyone wants to be a journalist, but Warthen’s goal is to make it easier for anyone with an Internet connection to give it a shot.