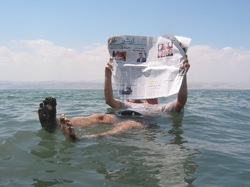 The Associated Press made waves today with its announcement of an “initiative to protect [the news] industry’s content.” This initiative will apparently have two major components: Legal action by the AP against web sites that illegally reprint its articles, and “new search pages that point users to the latest and most authoritative sources of breaking news.”

In and of itself, none of this sounds like a terrible idea. I’ve got nothing against going after sites that reprint full articles without permission (heck, that’s a problem we face at VentureBeat), and the AP’s old business model could certainly stand some revamping to fit the internet age. But it’s pretty hard to believe the AP is the best possible guide for readers navigating the world of online news, given the organization’s previous boneheaded demand that blogs take down posts including excerpts from AP stories.

Then there’s the fun irony that the AP’s main spokesman for guarding the value of news is chairman Dean Singleton. Yes, the same Dean Singleton who, in his role as chief executive of the MediaNews Group, was probably best-known for decimating newsrooms at papers like the San Jose Mercury News (former employer of VentureBeat’s Matt Marshall and Dean Takahashi) with layoffs. Back when I worked at a newspaper, most of the words we used to describe Mr. Singleton were pretty much unprintable.

That aside, the more I think about yet another search page for news, the more skeptical I become. If you read between the lines of the AP’s announcement, as well as other coverage, you can hear echoes of the old newspaper beef that they’re not getting priority play in mainstream search results like Google‘s — hence the AP’s language about “authoritative sources.” The problem is that anyone who takes a real look at Google News (or at least its technology section) will find that it’s already dominated by traditional news sources, often at the expense of blogs or smaller sites that may have actually broken a particular story. Unlike others at VentureBeat, I don’t have a huge problem with that; as a journalist, I want credit for the stories I broke, but as a newsreader I care about finding the best story, not the first one. More importantly, anyone who thinks that we need another news aggregator that does even more to prioritize a story from (say) the New York Times — even if that story is just a reprint from (say) VentureBeat — is crazy.

I’m also getting awfully tired of this hypocritical game of calling internet companies parasites. People like Singleton and Wall Street Journal Editor Robert Thomson would like you to believe that old media organizations generate all the reporting, while blogs like this one just steal their valuable content, but that’s complete BS. At both VentureBeat and my last job at a small-town newspaper, the AP and other news organizations have been perfectly happy to “borrow” my reporting and that of my coworkers. Anyone who reads a major newspaper regularly should be familiar with the attribution, “according to [other news organization goes here].” At the same time, I write plenty of posts (like this one) pointing to and commenting on reporting elsewhere. What’s the difference? Unlike many a traditional publication, I’ll actually provide a link.