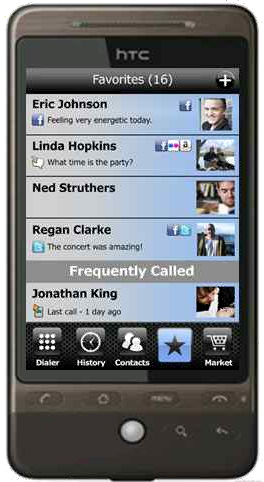 A new application called Asurion AddressBook launches on the Android Market tomorrow, opening up new ways to use social media on the phone — and instantly making the iPhone look even more outdated for not running applications in the background and its lower app integration. Asurion AddressBook can be downloaded here.

At its core, the application is an address book that integrates various app feeds, just like the Palm Pre, Motoblur, or what Friendfeed does on the web. Still, these other services offer only a very limited level of integration between social network profiles and address books. You have to link them manually, and after that you only get status updates at best. You still have to go to each individual social networking site to view more or respond to updates.

By contrast, AddressBook for Android enables a much richer level of experience. For example, it gives the user access to full profile details, complete Facebook news streams, posted photos, links, notes, status updates and the ability to respond from within the app, including wall posts, comments, VoIP calls, SMS, etc. Essentially, AddressBook reduces the need to switch between many other applications to gain social networking context for your mobile contacts, and to respond faster.

This goal is evident in the app’s various features — like how it lets me handle notification. While the Pre and others give me a continuous stream of feeds on my phone, Asurion AddressBook gives me a lot more power to filter streams so that I can pay attention only to the contacts that are most important to me. I can also customize the frequency and content of the alerts I receive. Accordingly, I could tell the app to only give me Twitter updates from Matt Marshall once a day, but Paul Boutin’s throughout the day.

AddressBook’s Smart Contacts feature adds location into the mix. Let’s say I am a McDonalds regular and always keen on finding a local franchise. Instead of doing a regular Google search, I can add McDonalds as a Smart Contact. That way, whenever I click on Smart Contacts within the app, it will instantly give me all of the McDonalds locations close to where I am.

Asurion AddressBook initially caught my attention at DEMO. And in the last couple of months I chatted repeatedly with the Asurion team on their progress since. During the beta, a lot of work was done to improve the user experience and the app’s handling of bandwidth. Carriers definitely appreciate that AddressBook only requires pulling up one app instead of all of them. Also, Asurion made it extra easy to “import” contacts from any of the social networks I use.

Before now, most of my social network contacts have not been on my phone. AddressBook may very well change that. Its usage statistics are fairly impressive. An early tester group has been reporting an average of 20 minutes of use a day. Basically, Asurion is seeing two modes of use: short views 10 to 15 times a day that last a minute or less (receive a notification, check it out, respond), and longer browsing sessions up to 20 minutes exploring various connections and app feeds. 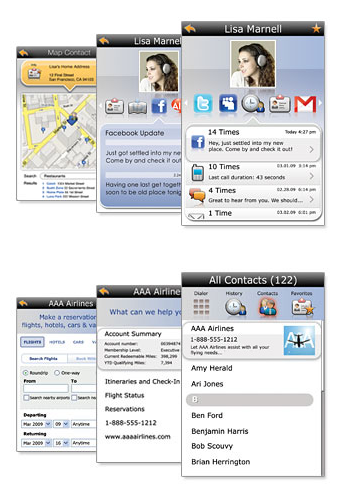 I’m particularly fascinated by how much the app enables me to explore the social behavior of my contacts via my phone, and in a way I haven’t seen before. A prime example of this is its integration of YouTube video. In my AddressBook communication flow, I can see any of my contacts’ recently uploaded videos and favorites. AddressBook launches me directly to the YouTube application that comes pre-loaded on Android-based phones. The same principle goes for Amazon wish lists, where I can see if a contact has updated any of his titles. I can then start a conversation about a any items on that list and the people’s interest.

The AddressBook is one of the most powerful Android apps I have seen so far, taking full advantage of the phone’s unique capabilities, especially its Intent and Activities features. (For an fairly non-technical overview of what makes Android special read this summary by IBM’s Bill Zimmerly or the fundamentals section on the Android developer site.)

The Asurion team started working on it the day the first SDK was released, more than a year ago. Intent, very simplified, helps developers determine how an app would and should be used. For example, right after a user takes a photo, the possibility to use to connect that to a Flickr app ‘pops up automatically’ for the developer on Android. While Symbian is similarly powerful in this area, the coding is much simpler on Android. This is why AddressBook’s developers were able to build neat new mini-apps of Facebook, Amazon, YouTube etc (called “Mixins”) in three days, something that could not have been done on any other platform technically (the iPhone OS doesn’t want apps to ‘talk to each other’) or in such a short time frame (it would have been more elaborate to piece together on Symbian).

For us at VentureBeat, the increasing openness of mobile operating systems and how it relates to next generation address books is one of the major topics in mobile this year. As our guest writer Jason Devitt explained earlier, the adress book is a strategic point of conflict in the mobile industry:

Unlike email, every call and text costs you money, and the amount you pay often varies based on the number you dial. Essentially, who you select to call from your address book affects how much money your carrier makes from the call. For a long time consumers bought phones from carriers, which wielded complete control over all the software on their handsets, including address books. But the rapid rise of the smartphones — and next-generation operating systems — changes the rules. Carriers make money selling data plans, not selling their own apps. Offering more apps means more data plans, and giving up some control leads to a much greater number of apps.

Still, carriers want their revenue from voice and data to grow. So they want users to continue to call others from their address books, not just message them through multiple channels. That’s where applications like AddressBook may be a endangering the user behavior model the carrier business is built on.

Jason isn’t the only one arguing that “carriers assume that most consumers won’t take the time and trouble to replace their default address books with third-party options.” That’s also one of the reasons carriers are interested in running their own services and social network aggregators on Android, as we recently noted.

While Asurion technically pushes the envelope in a lot of areas, I was uncertain how carriers would react to it. So I was particularly pleased to hear that a carrier may pick the AddressBook as a white-label solution in the future.

Nancy Benovich, vice president of engineering at Asurion had this to say:

Operators are analyzing their strategies because they have a brand, monthly recurring service fees and need to be at the center of offering value for their brand — and they want to be able to protect the contact info and other data consumers have in their address book and on their phones. They seem to respond well when you can offer them a solution that focuses on end-user experience and value, aggregating content and communication while still having the operator brand be at the center.

She also noted on the carriers see a scenario Jason Devitt hinted at, namely that “if users have all their data on Facebook, they could easily switch between carriers.” The mobile address book space will only get more exciting and contentious as more apps like Asurion’s burst onto the scene.