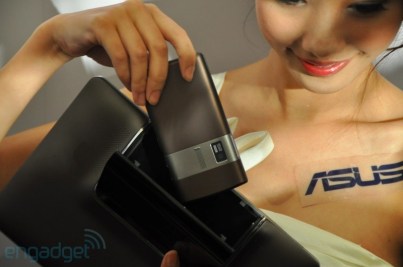 What the heck is a Padfone? It’s the smartphone/tablet combination device that Asus has been hinting at over the past few weeks.

Asus announced the Android-powered Padfone at Computex in Taipei today, and while it only had an early mockup to show off, it definitely seems like the company is onto something with the device. My biggest beef with most tablets at the moment is that they seem superfluous if you already own a smartphone and a decently portable laptop. Now with the Padfone, the tablet literally becomes an extension of your smartphone.

Asus didn’t have many concrete details to announce on the Padfone. We do know that the tablet shell is fully powered by the smartphone, which makes sense, since tablets and smartphones already share similar hardware. The tablet shell contains a larger screen (of course), speakers, extended battery, and an I/O extender that will allow other devices to communicate with the phone.

At the moment, Asus is using a 4.3-inch smartphone and 10.1-inch tablet shell to demonstrate the device, but the company says those sizes could change by the time the Padfone is actually released.

I don’t suspect this will be the last tablet/smartphone combination device that we’ll see. And it will only make more sense as smartphone hardware improves. I’d certainly be willing to spend a couple hundred bucks on a tablet shell to extend the functionality of my smartphone, instead of spending around $500 on a tablet with pretty much the same hardware.

Asus says that it’s aiming to release the Padfone around Christmas. There also aren’t any pricing details to speak of yet. I’m personally hoping that Asus makes the tablet shell compatible with all of its upcoming smartphones, instead of making it a single accessory for one smartphone.