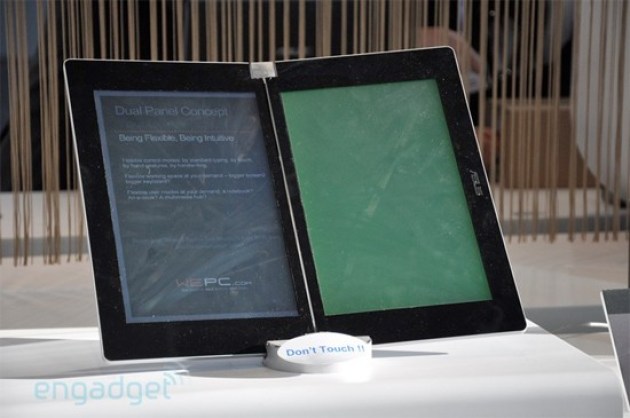 I could write hundreds of words trying to explain why a dual-screen e-reader is a hot concept worth testing in the market. Or you could look at the above photo and grasp it instantly. Asus displayed the two-screener as a concept mockup at the CeBIT trade show in Hannover, Germany in March, where Engadget snapped the above photo.

The Times of London reported Sunday that Asus is working to launch a two-screen e-book reader for a guesstimated price of 100 British pounds, or around $150, before the end of this year. Here’s the feature rundown:

Unlike current ebook readers, which take the form of a single flat screen, the Asus device has a hinged spine, like a printed book. This, in theory, enables its owner to read an ebook much like a normal book, using the touchscreen to “turn” the pages from one screen to the next. It also gives the user the option of seeing the text on one screen while browsing a web page on the other. One of the screens could also act as a virtual keypad for the device to be used like a laptop. Whereas current ebook readers have monochrome screens, the Asus would be full colour. The maker says it may also feature “speakers, a webcam and a mic for Skype”, allowing cheap phone calls over the internet.

Just as important to the product’s design is its low price, which could undermine the $300-500 price range of e-readers from Sony and Amazon. Asus, known for its sub-$400 Eee PC that changed consumers’ preconceptions of how much to spend on a laptop, hopes to repeat its performance in the e-reader market. “Any such product has to have the right combination of functionality and price,” an Asus spokesperson told the Times. “No one is going to buy one for £1,000.”

Will Asus be able to deliver a quality reading experience for $150? My take is that it doesn’t need to be the best display ever. Like iPod audio and YouTube video, it only needs to be good enough.