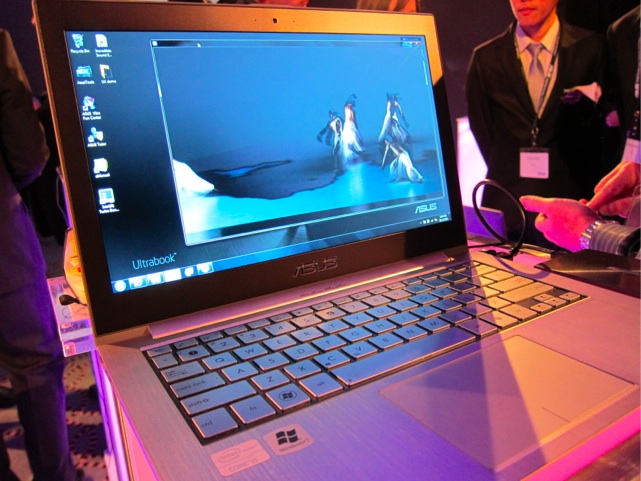 Asus kicked off its first lineup of ultraportable MacBook Air killers today at a New York City event, dubbed ZenBooks for their balance of beauty and strength.

But even though Asus chairman Johnny Shih took great pains never to utter the phrase “MacBook Air” at the event, the specter of Apple’s popular ultraportable was evident.

At first glance, it’s impossible not to think of the MacBook Air when looking at the all-metal design of the ZenBooks. Asus also chose to release 11- and 13-inch Zenbook models, just like the MacBook Air. Indeed, it seems that throughout the entire design process of the Zenbook, Asus designers spent more time trying to emulate and one-up Apple’s design, instead of trying for something truly original.

Asus did manage to deliver some nice features in the Zenbooks not found in the Air, or other ultra book competitors. They feature USB 3.0 ports, which are much faster than the USB 2.0 ports in the Air. Asus also saw fit to pack in free ethernet and VGA adapters with the computers, which typically cost around $40 or more from Apple, as well as a free sleeve.

The Zenbooks feature standby times of two weeks, which Shih claimed were much longer times than the Air, even though Apple lists its standby time as one month. Using Asus’ Super Hybrid Engine 2 technology, the computers can always resume from standby in under two seconds. Judging from the short time I had with some demo Zenbook models at the event, boot times were around 15 seconds, about the same I see from the MacBook Air.

Asus did manage to undercut Apple slightly with pricing at least. The 11-inch Zenbook starts at $999 with a 1.6Ghz Core i5 CPU and 128GB solid-state drive, while the comparable MacBook Air model only includes a 64GB drive. The 13-inch model will start at just $1,099, compared to $1,299 for the 13-inch Air.

From the short hands on time I had with the Zenbooks, they feel about as solid as the Air (even though they don’t have a unibody metal design). Opening up the Zenbooks was slightly difficult, due to thin edge of the computer (Shih struggled for some time to open up the computer while he was on stage.) The keyboard feels surprisingly comfortable, but I had some trouble dealing with the trackpad, which has separate zones at the bottom for right and left-clicking. The trackpad was at times unresponsive, and doesn’t feel as smooth as the Air’s glass trackpad.

The Zenbooks are also part of Intel’s Ultrabook push for thin ultraportables. An Intel representative joined Shih on stage to praise the computers, and reiterated the company’s prediction that ultrabooks will be the next major wave for computer design.