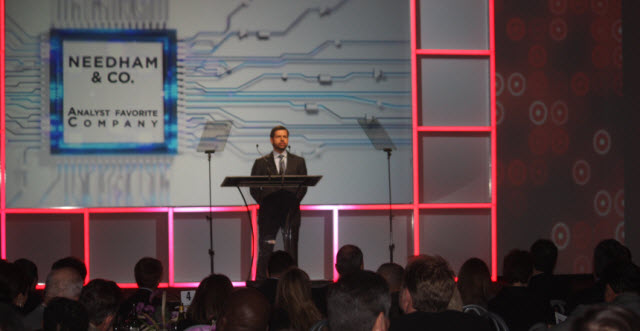 The global semiconductor industry will grow 1 or 2 percent this year and finally hit $300 billion revenue in 2011, marking the first time it has done so. At the At the Global Semiconductor Association’s annual awards dinner today in Santa Clara, Calif., analysts predicted the industry might grow 1 percent to 5 percent in 2012.

That’s what you call a mature market. I remember in 1996 that the respected chip economist Vladi Catto of Texas Instruments predicted that the industry would hit $300 billion in the year 2000. It took about 11 years longer than Klesken and anyone else expected to hit the milestone. That’s a sobering fact and a reminder that growth never turns out the way you expect it.

But here we are, in 2011, and the 60-year-old-plus chip industry is still celebrating its startups. At the dinner tonight, the association touted the innovations and growth not only of its giant companies such as Intel, but also the small startups in fast growth mode. It was funny to see the group offer an award to the “emerging public company of the year” — NetLogic Microsystems won that prize. In most industries, all of the emerging companies are private startups.

The chip industry is at least growing at around the same rate of the world economy this year, and it had to deal with supply chain catastrophes related to the earthquake in Japan and the floods in Thailand. Smartphones, ultrabooks, and Windows 8 could spur growth in 2012, according to Needham & Co. analyst Quinn Bolton. And it’s easy to lose sight of the fact that, as GSA founder Jodie Shelton said, the number of internet-connected devices — which have plenty of chips in them — will grow from 5 billion now to 22 billion by 2020.

“The tendency in a slow time might be to retreat from research and development,” Shelton said. “But those that innovate will prosper in years to come.”

For sure, it took a lot longer than everyone thought to hit $300 billion in revenue, and it doesn’t seem like such a great achievement in a year when the industry is growing so slowly. Still, the chip industry is the bedrock of the $1 trillion-plus electronics industry. And its pace of innovation is punishing, with new chip factories costing as much as $4 billion to build now. Every two years, chip makers have to invent entirely new processes to keep the lights turned on, and chip designers have to create high-demand chips to keep the factories filled. Moore’s Law, the prediction by Intel chairman emeritus Gordon Moore that the number of transistors on a chip will double every two years, demands continuous breakthroughs.

That’s why there are still innovative startups in the business. The association’s long list of awards included the “startups to watch.” The nominees on that list this year were Amalfi Semiconductor; Netronome; Newport Media; and Quantenna Communications. The winner was Amalfi, a fabless company focused on wireless and mixed signal chips, with more than 50 million chips shipped to date.

SandForce and Silicon Mitus were nominated for outstanding revenue growth for a private company, and SandForce won. The most respected private company award nominees included Ambarella, Aptina Imaging, and SandForce. Ambarella, a maker of low-power imaging chips, won the award. Nine chip companies managed to have initial public offerings this year, and 10 more are in registration. Invensys, which makes gyro chips for the Nintendo Wii’s controller, is still trading 19 percent above its IPO price. 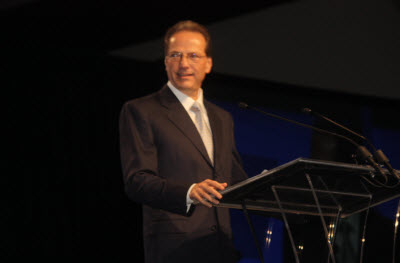 The most prestigious award of the evening, the Dr. Morris Chang Exemplary Leadership Award, went to Henry Samueli (pictured right), the co-founder of Broadcom. He started Broadcom with his friend Henry Nicholas in 1991.

They had to design digital communications chips — which typically had to be built in a highly customized factory — that could be built in a standard plain vanilla chip factory. They had to do that because that was the only kind of factory that Broadcom — a fabless semiconductor company, or design house — could find to make its chips. Broadcom’s engineers had to be twice as good as rivals who had their own factories.

In 1996, the company had 60 employees and generated revenue of $4 million a quarter and had a valuation of $100 million. Now the company has $8 billion in revenue and is the 10th largest chip company and has 10,000 employees. Both Samueli and Nicholas — who had their share of controversy with options backdating cases and government investigations in the past decade — appeared humble and wizened in a video celebrating Samueli’s contributions, on the 20th anniversary of Broadcom’s founding. Despite a black mark on his career that forced him out of Broadcom, Samueli was greeted with a standing ovation.

“Of all the accomplishments of the company that I am most proud of, it is the impact on society,” Samueli said. “Broadcom played a big role in the broadband revolution.”

In his acceptance speech, Samueli thanked his wife and recalled being such a bad father because he had to work past midnight every day at Broadcom in its startup days. He says that now, with a two-year-old grandaughter, he is making it up by spending more time with her. He also thanked his partner Nicholas and Broadcom’s employees. Still worth billions, Samueli has become quite the philanthropist. He had quite a career, all because he left his cushy tenured position as a professor at the University of California at Los Angeles and started a crazy little chip company.