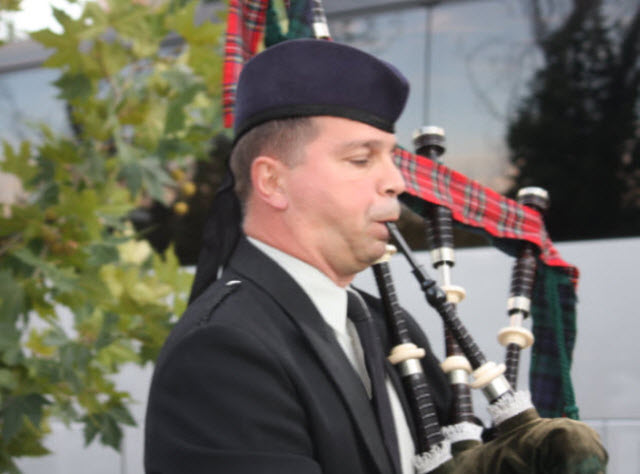 Tonight, a crowd of onlookers and press has gathered at Apple‘s headquarters to mark the passing earlier today of Steve Jobs. The flags are lowered to half mast. Employees are filtering out slowly. It’s a very sad scene as a small crowd looks at a bouquet of flowers in front of the building. Briefly, there was a rainbow near the campus.

I was just here yesterday to watch Tim Cook, chief executive of Apple and the successor to Jobs, introduce Apple’s next iPhone. The mood was celebratory then. Robert Scoble, tech blogger at Scobleizer, is here talking about his memories of Jobs and Apple. 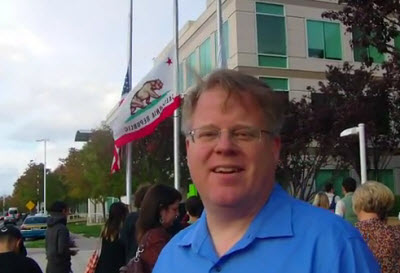 “I grew up a few miles from here and used to steal apricots from the trees here,” Scoble (pictured right)  said. “My whole life has been intertwined with this company and Jobs.”

But most of the Apple employees were walking by the press. They were not making eye contact. Many milled about in front of the building, where flowers were left in front of the address sign. Apple employees were also dropping off flowers and other tributes to Jobs at a bench on the side of the front building, near a big lawn. And, of course, they were all snapping photos of it with their iPhones.

After Richard Charet heard about Jobs’ death, he came to Apple’s headquarters in Cupertino, Calif. Charet (pictured at top), a self-professed Apple fan, showed up in Scottish kilt with a bagpipe. He walked up and down the sidewalk, playing “Amazing Grace.” He said he was a Canadian himself but felt like paying a tribute to Jobs.

Of course, Steve Jobs has to be remembered with music. More than a decade ago, Jobs and Apple turned the music world upside down with the iPod. Now it is fitting he received the bagpipe tribute. It seemed appropriate for the day.

Here’s a video of Charet, surrounded by the media. We also have a video of him talking with the media and a video tribute by Robert Scoble. 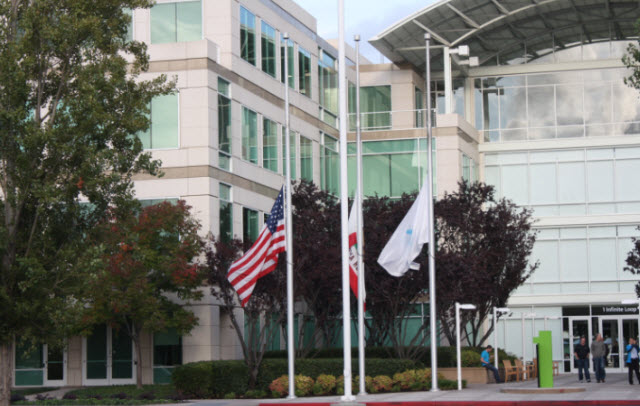