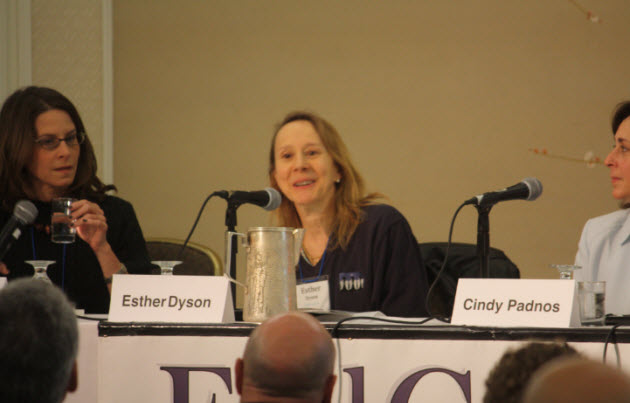 Most conferences celebrate business successes. At the second annual FailCon event in San Francisco, the stories are all about how to fail gracefully with a startup.

The point isn’t to teach people to fail but to help others learn from your own failures. The investor panel came up with a number of tips about how to fail without alienating everyone else around you, including your employees, co-founders, investors, and customers. The conference recognizes that many of Silicon Valley’s biggest successes are built on the rubble of past failures. About 400 people are signed up for the one-day event.

Investor Esther Dyson (pictured above, middle) of EDventure said that the first challenge is to recognize a startup is failing, sort of like acknowledging a tragic event in the grieving process. That can take years to recognize, she said. Often, she said, that’s because the people who should recognize the problem such as the CEO or the board chairman are too close to the problem to see it. When it’s clear a startup is failing, there’s a way to land gracefully, according to the panel headed by New York Times writer Adriana Gardella.

“You have to optimize downward,” said panelist Guy Hirsch, CEO of job recruiting firm SayHired. “If you land the plane safely, you will no longer be a black sheep with your investors. You will be a hero.”

That means that you have to operate in a way that shows you have integrity. Don’t, for instance, sign a long-term agreement when you know you could be out of business in a matter of days. Don’t borrow lots of money if that’s not going to fix your problems. Tell the relevant people when you get sued or some other big event happens.

Dyson said that nine out of 10 startups fail. If you operate as if failure were not possible and you fly the failing startup until it hits the wall, you will surprise a lot of your partners or investors and bring them down with you. They won’t forgive you for not telling them about the imminent failure.

Manu Kumar, a partner at early stage venture fund K9 Ventures said you have to apply strategy when negotiating for a white knight buyout. One of his entrepreneurs made the mistake of telling a potential acquirer exactly how much cash his company had. The acquirer figured out if they waited a few weeks, they could buy the company after it failed and pay a much lower price. Instead of getting a return of three-times-annual sales, the return for investors after the sale was a tenth of that.

One of the moves investors usually make before they pull out of a startup is to get the entrepreneur to bring in other investors. If there are other outside investors who want to come into the company, they could very well buy the stakes of the earlier investors who have lost their appetite for risk. 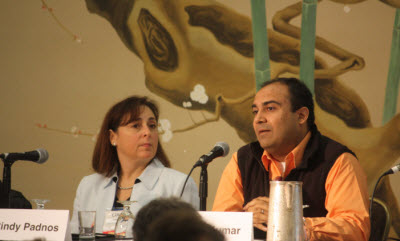 Kumar (pictured right) noted that, to the degree the information is available, he will pay attention to how well an entrepreneur handles their own personal finances, as that is usually an indicator of how well that person will handle the startup’s finances.

Cindy Padnos, panelist and founder of web investment firm Illuminate Ventures, said one of her failed startups was sold back to its founder for just $10,000, or the amount of the legal fees. That was because the founder believed in the technology and was willing to mothball it until the time to bring it out into the market was ripe. The investors could have owned the intellectual property, but they saw no point in doing something with that property without the entrepreneur’s help.

“The reason failure is so valuable is it gives you courage,” Dyson said. “It’s more terrifying if you haven’t done it before. People who have been fired once aren’t really afraid of being fired again.”

Dyson said that it’s possible to fail with a startup even if the investors get a return on their initial investment. That’s because the difference between success and failure is often whether a return is small or huge.

On another panel, Paul Buchheit of Friendfeed (now owned by Facebook), said that one of the social network’s mottos is “Move fast, break things.” That often isn’t encouraged at big companies, but it means the organization is willing to tolerate the risk of failure for the sake of speed.