AUSTIN, Texas — If there are two things that bind the South by Southwest Interactive festival (SXSW) and the city that hosts it every year, they are technology and barbecue.

So it makes total sense that General Electric would set up shop near the Austin Convention Center, SXSW’s ground zero, with what it called a BBQ Research Center. 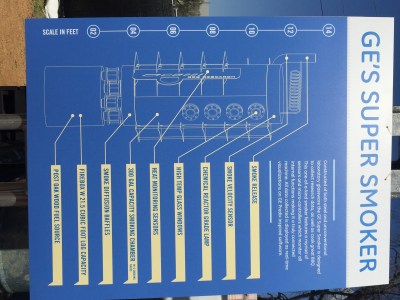 Above: An explanation of the sensors used in the super smoker.

That’s why GE commissioned a 12-foot-tall “super smoker,” the biggest-daddy barbecue cooker I’ve ever seen, with seven embedded sensors designed to generate data that is then transmitted to analytics software.

Which, of course, is a dry, techy way of saying that GE built a system designed to make some damn good brisket, ribs, and sausage.

Inside the giant smoker, five sensors constantly measure the temperature inside the box, DeRose told me. Another keeps track of relative humidity and smoke flow out the chimney.

On a nearby screen, the data shows up in real time. According to DeRose, the most important is a line showing the temperature. “We want the temperature data to come into a straight line,” she explained, “so the cooking parts are all at an even temperature.”

One of the most important aspects of this system is that it is designed to provide the barbecue’s pitmaster with a real-time look at how his meat is doing without him having to open the cooker. That helps maintain a steady temperature during the 18 hours, seven hours, and one hour it takes, respectively, to cook brisket, ribs, and sausage, DeRose said. “That means he can cook more reproducible barbecue,” she said.

More to the point, this is the barbecue version of understanding how any of GE’s industrial processes actually operates, DeRose argued.

Does it all work? DeRose, a frequent barbecue cook at her New York state home, thinks so. But this is Austin, and the bar is set very high. Though I’m from California, I have to admit that despite my hoping for perfectly cooked high-tech barbecue, it was a tiny bit overdone. Maybe relying so much on data analytics when cooking ribs isn’t quite the way to go.