As destinies go, Tyler Bushnell has a good one. The son of Atari cofounder Nolan Bushnell wants to bring back retro arcades, and he has cofounded a company to do that, Polycade.

The elder Bushnell created the video game business 46 years ago with the launch of games, such as Pong and Breakout, which are now familiar brands. But Tyler Bushnell has created a platform for indie games, the unknown titles that he believes deserve to be played in the social style of arcades, with sweaty-palm controls and face-to-face competition.

Tyler Bushnell and his cofounder Jake Galler have created an arcade machine that is smaller than a cabinet and can hang on a wall. It has a 28-inch LCD screen, and it fits in any home, office, bar, or restaurant. Polycade is shipping it with 11 games.

“I always wanted to work in gaming,” said Tyler Bushnell, in an interview with GamesBeat. “Growing up with my dad’s training, he strongly believed you never get into a business unless you have a unique concept, something no one else is doing. I never really saw the right concept to enter the space, but I always wanted to build an empire in games.” 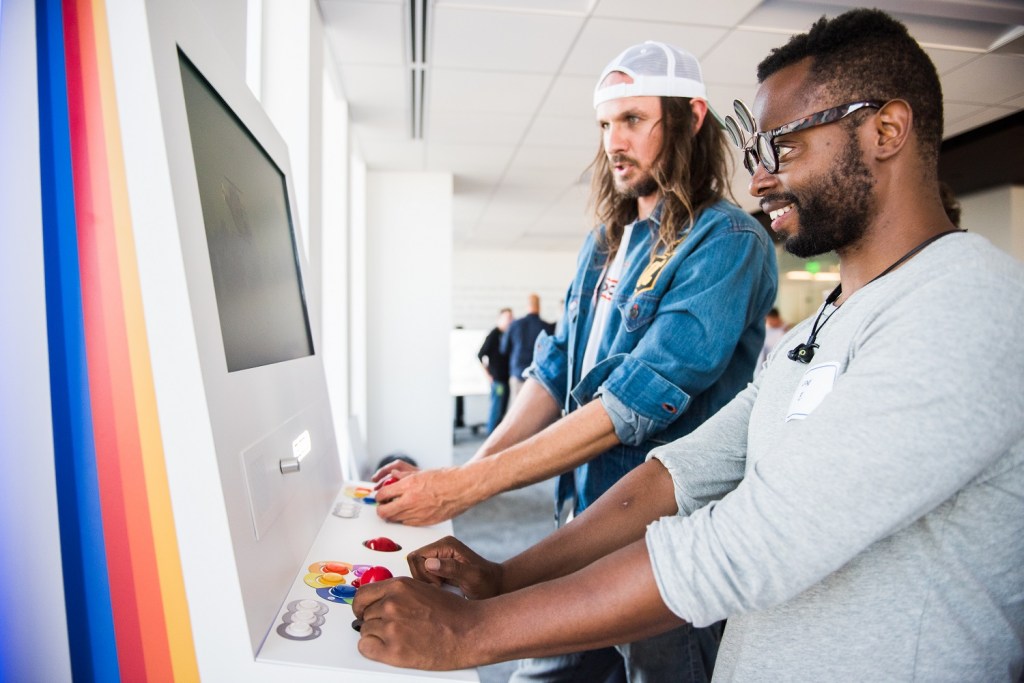 Above: Tyler Bushnell (left) plays a game on Polycade.

By contrast, arcade machines are plentiful. They’re heavy, take up a lot of space, and don’t fit into the aesthetics of a lot of homes and businesses. Polycade’s approach is minimalistic in design — but with a multiplicity of titles. It has a monitor and two eight-directional joysticks for multiplayer, as well as a track ball. Inside is a powerful gaming machine that can run everything from retro arcade games to Fortnite.

As one of eight Bushnell children, Tyler Bushnell grew up surrounded by arcade games like Donkey Kong and Breakout in the home. But his girlfriend felt that an old arcade machine didn’t fit in a modern home. Older arcade machines also required a technician to fix them and keep them running, making owning an arcade machine a big chore. So, he and Galler started working on Polycade in 2015. They sought to raise $20,000 on Kickstarter, but they brought in $125,000 instead.

They prototyped the system and found that there were some modern indie titles that work beautifully as arcade games, Tyler Bushnell said. But no one was putting indie games on arcade machines. Rather, they were pirating retro games.

“There was nothing going on on this side of the business,” with indies, he said. “So I started chasing this concept.”

At the same time, Barcades and other retro arcades in bars and restaurants — as well as Dave & Buster’s joints — are “killing it,” Tyler Bushnell said.

“They don’t make money on arcades alone, but it’s a draw. It’s shoulder rubbing,” he said. “You meet strangers. Hundreds of people told my dad over the course of his career and told them that they met a significant other by playing Pong. That kind of romanticism and the social aspect of the arcades is something I was drawn to. Jake and I have been buddies for a long time. We are the gaming champions of our friend group. Jake and I saw it as a stepping stone to something much larger.”

Polycade is now delivering its Kickstarter units to early supporters and ramping up the distribution, Galler said. The Polycade machines are modular, don’t break down, and have readily available replacement parts, he said. They cost $3,900.

And Polycade is also going through an accelerator in Philadelphia: the Comcast NBCUniversal Lift Labs Accelerator Powered by Techstars. They’re halfway through a 13-week program where they’re meeting lots of other entrepreneurs, investors, and corporations that can be supporters. The program, which includes 10 other starts and other game companies, such as Tally Interactive and Thinker Tinker — will culminate in a demo day in October, said Maya Baratz, managing director of Techstars, in an interview with GamesBeat. 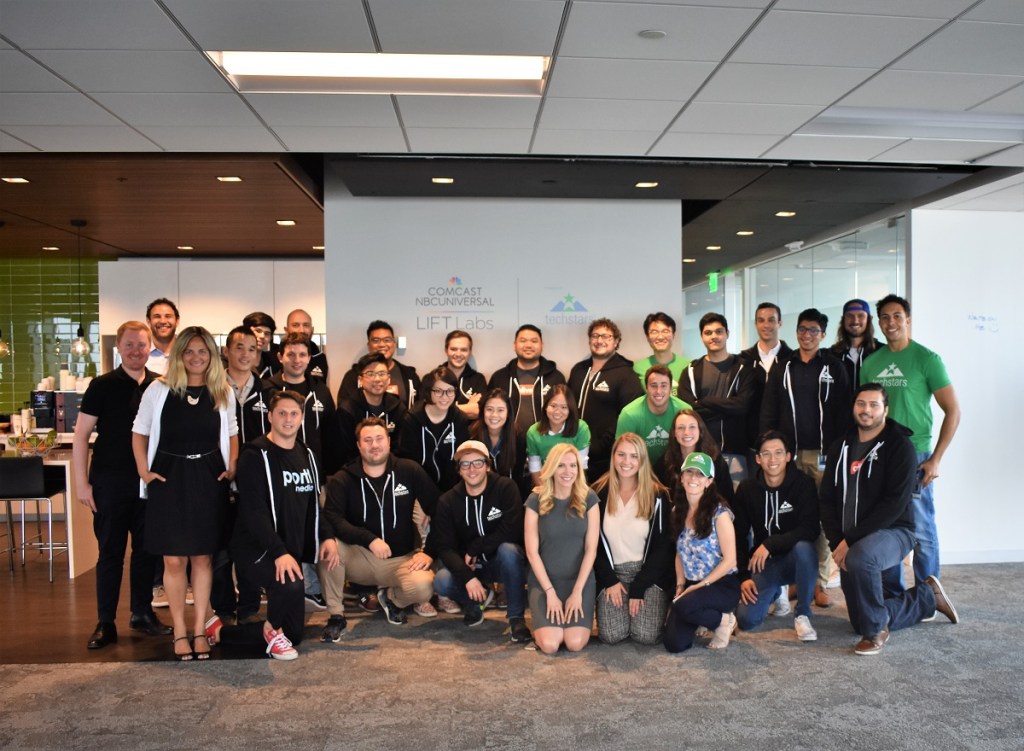 Above: The summer of 2018 Techstars class at Lift Labs in Philadelphia.

Tyler Bushnell’s brother, Brent Bushnell, also received an investment from Techstars Ventures for his company Two Bit Circus, a maker of micro-amusement parks. That motivated Tyler Bushnell to apply as well, at the right moment.

“Techstars is known for their concept of ‘give first,'” Tyler Bushnell said. “They connect us to a massive network.”

The Los Angeles-based team is small, with three full-time people and a lot of suppliers. Danielle Cohn, head of Lift Labs, said in an interview that a total of 110 mentors are cycling through the accelerator to give advice to startups, such as Polycade. In return, the accelerator takes a 6 percent stake in the startups.

“One thing that stuck out for me is the team,” Baratz said. “Tyler has an amazing family pedigree. They are scrappy and working hard. The DNA in the company is very strong. That’s a big reason why we picked them.”

She thinks there’s also a big opportunity for Polycade in retail locations, which are struggling to stand out and hold on to their customers for a longer time. Polycade has shipped its first machines to Brent Bushnell’s company, Two Bit Circus. Tyler Bushnell is stoked about adding more and more games to the platform. Galler said the key is curating the games, so the best ones get recognized and played.

“The indie titles that we really love are short form, snackable, easy-to-learn two-button games,” Tyler Bushnell said. “Like my father used to say. Easy to learn, difficult to master.”