The Atelier series has a conceit that’s a bit different from the Final Fantasys, Tales, and just about every other Japanese role-playing games out there — alchemy. Creation is key; you use recipes to make new items as you take on the challenges you find in the series’ gorgeous worlds. From the dev studio Gust, Atelier first hit Japan in 1997, but it took eight years for it to hit the West with Atelier Iris: Eternal Mana in June 2005.

Atelier Lydie & Suelle: The Alchemists and the Mysterious Paintings came out in March 2018, and it was the first Atelier game I’d ever played. I wanted to learn more about the series, so I asked Gust’s associate head of development Keisuke Kikuchi some questions about the franchise. He’s working Atelier Ryza: Ever Darkness & the Secret Hideout, which was just announced for release in Japan on September 26 and in the West on October 29 for PC, PS4, and Switch. Koei-Tecmo has been the series’ publisher over the years.

What helps the Atelier series stand out is that it’s not one of those melodramatic “the world’s ending, and you’re its savior” games. It focuses on the stories of its protagonists; making and mixing; exploration bright, colorful worlds, and combat. We also talked about what platform sees the strongest Atelier sales — this surprised me! — and in which region it’s strongest.

Here is a edited transcript of our email interview, which I conducted via a translator.

GamesBeat: The Atelier series has been in North American now since the mid-2000s? How well has it done here?

Keisuke Kikuchi: In the past, we used to launch one new Atelier title per year, and we are proud of having a group of loyal fans constantly supporting us. Although we still have smaller fan base currently compared to some other titles, we are aiming to improve and make changes in order to attract more fans from North America.

GamesBeat: What region has the strongest sales for Atelier?

Kikuchi: Japan has the top sales, but sales in Asia are still growing since last year.

GamesBeat: What’s been the best-selling Atelier game in the U.S.? 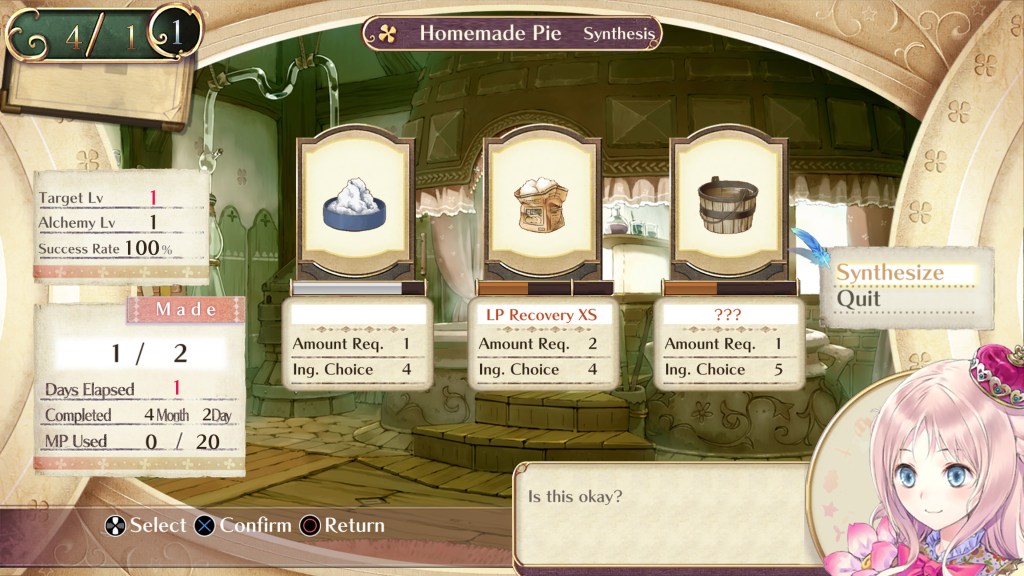 Above: Recipes are a key component to the Atelier series.

Kikuchi: The console versions have almost had the same performance throughout the years, but the best-selling title overall would definitely be Atelier Sophie: The Alchemist of the Mysterious Book [2015 for PS4, PS3, Vita, and PC].

GamesBeat: How difficult is it to localize for the U.S. market?

Kikuchi: We are so worried about if we can convey the nuance of the scenarios and the characters’ personalities accurately to the U.S. market. Especially for the gag scenes, we are not sure if users from NA will have the same response as Japanese users, you know, “Are they going to laugh?” Also, as you may know it already, one of the Atelier series’ features is to grind for rare traits, and then enhance or create powerful items and equipment via synthesis. Most of our Japanese fans love this very much but we don’t know if users from NA will like and enjoy it or not.

GamesBeat: Where does this fit in the landscape of Japanese RPGs?

Kikuchi: We would like to define this title as “a lite simulation RPG.” Unlike some triple-A RPGs that have huge maps and long scenarios, this series is focusing on repeating a cycle of gathering, synthesis, and battle. This is one of the points that makes it different from other RPGs. Another point is, the protagonist is not going to “save the world.” Instead, the series always follows a warm and bright main storyline with a focus on vivid characters and their stories.

One more thing I would like to point out is, yeah, we have a lot of protagonists.

GamesBeat: Why does the conceit of alchemy resonate with its fans?

Kikuchi: Well, when you are talking about alchemy, it’s all about putting raw materials into the cauldron and mixing them together to get the essence inherited and create something complete different. We believe that people all have desires to master such skills of item creation, so we are just trying to fulfill their desires.

GamesBeat: Has the series ever told a story across several games, or is each game telling its own story?

Kikuchi: Actually, each title has its own story, and each individual story ends by each title. However, as you may know, we do have trilogies. The worldview is linked, the characters are bonded and the timeline is also shared within one trilogy. We do have 20 titles so far, but for new users, it’s totally OK to begin with any title, just make sure you start at the beginning of a trilogy, otherwise you might get confused about the relationship with characters.

GamesBeat: Besides the alchemy focus, how else does this series stand out?

Kikuchi: The conception of the world and the charming characters. We’re trying to make the users feel like the Atelier series is very close to their lives, that’s why we have been focusing a lot on daily routines to create a warm, relaxed world to our users.

GamesBeat: Of the current consoles, what platform has the best sales — PlayStation 4 or Nintendo Switch?

Kikuchi: Well, for EU and NA, the number of sales on Switch is catching up with the PS4 version due to constant growth, but in Asia, the Steam versions dominates sales.