Atmel is showing off its vision for the future of car touchscreen displays at the 2014 International CES. The the semiconductor company’s vision includes curved displays with no mechanical buttons.

The AvantCar concept feature XSense flexible touch sensor chips and are meant to highlight the next generation of human-machine interfaces. The challenge for cars is to make everything easy to operate and noticeable — without distracting the driver. The concept technologies might be available in cars as soon as 2017.

Stefan Thaler, a marketing director at San Jose, Calif.-based Atmel, said in an interview with VentureBeat that consumers are accustomed to the responsive touchscreens on their smartphones and tablets. They want the same rich experience from the screens in their cars, too.

“We’ve tried to look into the future of the human-car interface,” Thaler said.

Many cars on the road have the old resistive touchscreens — if they have the devices at all. Those screens are slow to respond and inaccurate compared to capacitive touchscreens on smartphones. The latest sensors also support curved screens, personalized color schemes, and navigation via touch buttons and sliders.

The AvantCar concept has a fully functional center console consisting of two large curved touchscreen displays with no mechanical buttons and a slot for docking your smartphone. One screen features a navigation map, and another has capacitive touch buttons and sliders. The main screen and the secondary screen can show global positioning system (GPS) navigation, car thermostat, audio controls, seat controls and more.

AvantCar also enables drivers to personalize their car environment through advanced touch capabilities and the automotive local interconnect network (LIN) connectivity system. A driver can push a single button to modify the car’s ambient lighting to suit a particular driver.

Besides XSense sensors, the car could use Atmel’s MaxTouch controller, QTouch for proximity sensing, and other chips. With proximity sensing, Atmel can detect where your finger is hovering on a screen so you can hit the screen more accurately. It also enables the car to distinguish when a driver is using the touchscreen or a passenger is doing it. Some tasks, like searching for entertainment, are unsafe for the driver but perfectly fine for the passenger to do.

The demo was designed with Germaneers, an automotive design house in Germany. The concept is in its beginning stages, and Thaler said it takes around three to five years for designs to be incorporated into new car models. Some features like curved screens are available in laptops, as well as proximity detection. 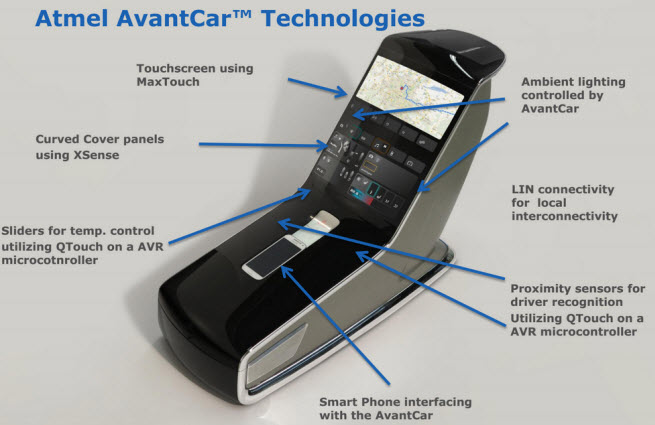 Above: This car has two touchscreens with curved surfaces.