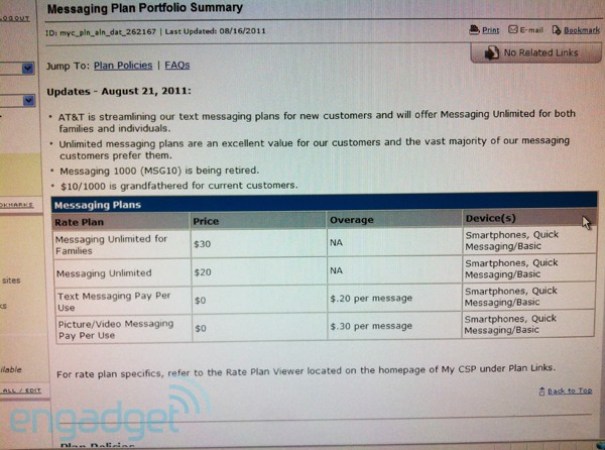 As if you need another reason to hate AT&T, the carrier is apparently planning to end its reasonable $10 texting plan for 1000 messages, forcing new customers to pay more for an unlimited plan or suffer through expensive per-message fees, Engadget reports.

AT&T has confirmed with Engadget that it will offer only a $20 unlimited texting plan, and a $30 unlimited plan for families with up to five lines, starting August 21. Existing subscribers of the $10 plan will be able to keep it for now, but just like AT&T’s defunct unlimited data plan, it will disappear if you ever leave AT&T and decide to come back.

“The vast majority of our messaging customers prefer unlimited plans, and with text messaging growth stronger than ever, that number continues to climb among new customers,” AT&T said in a statement this morning.

AT&T says that it’s “streamlining” its text messaging plans with the changes, but clearly it’s just looking for a new way to force customers to pay more for aging SMS technology. The change could be a response to the rise of messaging apps like Kik and Facebook’s recently released Messenger app, which allow for text and media messaging over cellular data instead of SMS.

AT&T customers who don’t want to pay for unlimited texting can still opt to pay per-message. Plain texts cost $.20 each, and picture and video messages cost $.30.

The real losers in the new deal are middle-range texting users like myself who text too often to pay per message, but not often enough to justify a $20 unlimited plan. It’s also yet another ploy by AT&T to keep existing users onboard — now many customers could face losing both their unlimited data plan and $10 texting if they jump to Verizon or T-Mobile.

If anything, AT&T’s behavior has finally convinced me that I need to move all of my friends over to a messaging app. At some point, I’d like to get rid of my texting plan entirely and not give AT&T another cent for SMS.