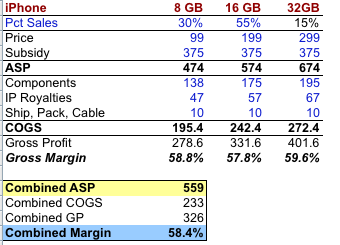 Turley Muller, who writes the Financial Alchemist blog, has laid out the math on Apple’s iPhone costs and pricing. Muller calls attention once again to something VentureBeat has reported before: AT&T is nearly buying its customers their iPhones. Customers now pay $99 to $299 for their phone. AT&T kicks in another $375 to bring iPhone prices down so low that the feature-packed device becomes a better buy than a cheaper but less-subsidized phone from another maker. That makes the average sale price of an iPhone anywhere from $474 to $674.

Muller’s spreadsheet, above, shows his estimates of Apple’s profit from 57.8 to 59.6 percent. Maybe his next post can explain something anyone must wonder after reading this chart: What is AT&T getting from iPhone users? Because it seems the wireless carrier has bought most of its customers’ phones for them, let them overrun its networks with their unlimited data plans, and earned nothing but hate for its not-quite-ready 3G network, which often fails to deliver data to customer phones. We’ve been told that the iPhone is partly to blame because it has poor reception compared to other phones, yet AT&T takes the heat for its customers’ weak connections. Fixing that reputation will require AT&T to install more cellular antennas, not a trivial investment. In every row and column, Muller’s numbers show that Apple has created a sweet spot for itself in the mobile ecosystem, largely at AT&T’s expense.