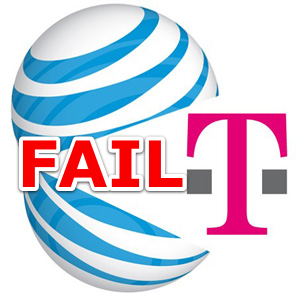 Question: What costs over $4 billion and a coveted slice of wireless spectrum? Answer: The stipulation included in AT&T’s bid to purchase rival carrier T-Mobile USA in the event the sale doesn’t go through.

Today, AT&T and current T-Mobile USA owner Deutsche Telekom announced that they are withdrawing the application for the merger, which was pending approval from the Federal Communications Commission. As a cautionary measure, AT&T has listed the $4 billion pretax charge on its Q4 2011 accountancy sheet, which includes a $3 billion payout to Deutsche Telekom, a portion of wireless spectrum valued at $1 billion and other assets. However, AT&T’s total loss could amount to $6 -$7 billion if the merger fails.

Both company’s still intend to pursue the merger, but it seems very unlikely to gain approval from government regulators.

AT&T and Deutsche Telekom first announced plans for AT&T to acquire T-Mobile USA for $39 billion in March 2011. T-Mobile, which is the fourth largest wireless carrier, has struggled to compete against Verizon, AT&T and Sprint. So, selling to a competitor for a large sum (or getting a payout if it doesn’t work out) is obviously an attractive option. AT&T, on the other hand, is interested in swallowing up T-Mobile to improve its wireless network infrastructure and eliminate competition.

Due to widespread opposition to the acquisition, it makes sense that AT&T is factoring in the $4 billion loss to its record books. In September, Attorney Generals from seven U.S. states joined the Department of Justice in filing a federal lawsuit against the merger. More recently, the FCC announced that it’s seeking a hearing on the merger before giving it approval. The deal also faces a lawsuit by third-largest wireless carrier Sprint on the grounds that it would eliminate competition.

As for withdrawing the FCC application, Reuters reports that the move is part of a strategy by both companies to refocus their efforts on gaining antitrust approval for the merger from the DOJ.