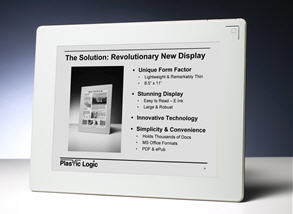 They’ve done it again. AT&T, the company that beat Verizon, Sprint, and T-Mobile to land an exclusive three-year contract as the iPhone’s network provider, announced today that it’ll be the sole wireless provider for Plastic Logic’s e-reader, with which Barnes & Noble announced a partnership on Monday.

Unfortunately, that’s all the detail AT&T has shared. The company has refused to state whether the Plastic Logic reader will be sold in its stores, or how much it will cost. But Glenn Lurie, AT&T’s head of emerging devices, told the Wall Street Journal that AT&T is on board with Plastic Logic’s plan to target business customers rather than mass-market consumers. “Those individuals are going to want to use it at home, in their office, in between,” Lurie told the Journal. More to the point, they’ll have money to spend on books and newspaper subscriptions.