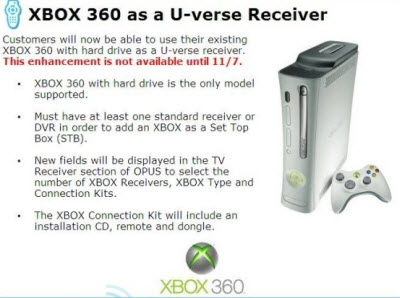 In 2007, Bill Gates announced with great fanfare at the Consumer Electronics Show that you would be able to use your Xbox 360 as a set-top box of the company’s Microsoft TV IPTV platform.

That meant that phone companies such as AT&T would be able to use the Xbox 360 to deliver TV services over broadband networks, cutting into the monopoly of cable TV companies.

More than three years later, it looks like it will finally happen in the U.S. AT&T’s U-Verse TV and web service will be able to use the Xbox 360 as a set-top box. Customers of AT&T U-Verse will be able to get access to this feature on Sunday, Oct. 17, according to Engadget. Then the actual consumer use of that feature will be activated on Nov. 7.

To use the Xbox 360 as a set-top box, you have to have a version with a hard disk drive. Then the Xbox 360 essentially becomes a receiver for U-Verse TV programming. The web-connected Xbox 360 receives the cable TV-like programming over your U-Verse telephone broadband line and then the Xbox 360 displays the show on your TV.

Yes, it is quite clever. For homes that are in U-Verse territory, you can get U-Verse subscription TV and internet service without having to get a set-top box. But it was a clever idea in 2007. Cable TV network Comcast is still pretty dominant, and AT&T U-Verse is far behind it in the broadband game. About a year ago, AT&T had 2 million subscribers while Comcast has well above 20 million. The great disruption didn’t really happen.