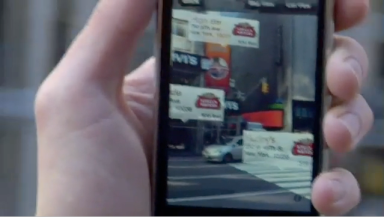 Augmented reality startup AcrossAir, which makes apps that help you find nearby subway stops and restaurants, turned profitable last month and is launching a bar finder this week. Augmented reality is a new field that lets you overlay 3-D graphics and information over the space around you through your phone’s viewfinder.

AcrossAir’s new app is a partnership with beer maker Stella Artois that lets you hold up your phone, pan around and see info tags superimposed over your surroundings pointing to nearby bars serving its beer. It will be a free app tracking 80,000 bars in the U.S., with Stella Artois pulling the data from its distribution database.

So how did AcrossAir start turning a profit? It relies on advertising, paid apps and partnerships like this Stella Artois deal. The company makes a number of augmented reality apps — from Nearest Tube, which helps you find subway stops, to Nearest Tweets, which shows you tweets from close by. There was also another deal to create WorkSnug, an augmented reality app that helps you find coffee shops to work in with WiFi and outlets (see a video here). The U.K.-based company’s augmented reality browser also has four paid advertisers on-board. Its most popular product is the subway finder.

Despite hype around the field, only one startup, Layar, has raised a venture-backed round in the last quarter.

“The whole augmented reality industry has just hit VCs in the face pretty quickly. They haven’t had time to digest it and see the impact. Secondly, no one really knows which particular platform is going to take off,” said Chetan Damani, AcrossAir’s CEO. “Then there are still concerns about technical limitations and GPS accuracy.”

Plus, augmented reality is pretty divisive in general, he said. “We rarely get the people down the middle — they either love it or they just don’t see the point.”

AcrossAir has eight employees, and Damani self-funded the company. He and his business partner also run a digital marketing agency called Imano.