Everyone is familiar with the phrase “We’ll fix it in post.” Unfortunately, this adage has become the overriding rule, as film and TV visual effects have skyrocketed in sophistication to meet programming needs and creative demands.

When it was conceived, the green screen was a safety net for productions. To add backgrounds and CG to film and TV projects, background colors have to be made transparent in a process called “chroma-keying.” Of course, this is easiest to do when the background is all one color, and not a color commonly worn in costume. When chroma-keying was invented, “green” became the go-to color for stand-in backdrops — or bright blue, if a costume actually did use green. It has since become, arguably, a creative crutch. No longer used as a pure toolbox, the process pushes most major cinematic decisions downstream to be created with post-production VFX. Just ask Ian McKellen, who almost quit The Hobbit after shooting scenes in a sea of green.

To those involved, VFX can feel like an endless escalation of creative demands by production teams. Augmented reality, however, offers exciting new possibilities.

Imagine, instead, a film set where the backdrop is a real-time virtual scene, as deep and convincing as the real thing, with parallax. Actors and directors can visualize their set, make their performance-based choices and save their shows both time and money by eliminating post-VFX shots. This is the reality we’re trying to create. For larger productions, this translates to removing months of post production and eliminating millions of dollars in costs.

Invented over 70 years ago, the blue/green now allows nearly all a scene’s work to be offloaded from a production shoot onto a small army of VFX artists. The result decades later, like so many things, is that these filmmaking conventions are ripe for disruption.

I know how frustrating the VFX process can be when you’re exporting “version 17 revision 6e-final2” on one single shot out of hundreds on a show; it’s a very special type of torture. On my first Hollywood job, I worked at a prestigious trailer finishing house in the old Hollywood Athletic Club building, where my time was mostly spent in this type of mess, organizing the hundreds of versions of green screen VFX shots for the blockbusters of summer 2007. I didn’t realize then how the dizzying experience I personally went through would shape ARwall more than a decade later.

Immersive backdrops can become a powerful tool for visual storytelling in film. It’s great being able to afford to send a 200-person crew around the world to glorious locations, but for most filmmakers, this is increasingly impossible.

There are several companies that perform similar work, although often for different use-cases. Vizrt does incredible work showcasing the practical applications of AR in live-broadcasts. You’ve probably seen one of the viral videos that went out last year showing primetime Weather Channel meteorologists in the middle of a flooding street, or demonstrating the effects of a hurricane out in the open.

Pre-Netflix and Hulu, TV shows broadcast on cable would split their seasons to air in the spring, with a summer break, and the fall, with a winter break. This built anticipation for each leg of the show, be it the premiere of a new season or the finale of the latest. Now that summer and winter mid-season breaks are becoming increasingly rare, as anyone can binge a show that streams ‘round the clock, more pressure is put on studios to turn out game-changing shows for high profile services, such as Netflix, while retaining the quality of production and post. Streaming services are thus to thank for the uptick in tight production schedules and year-round premieres.

Green screen replacements with built-in image composites solve the problem of waiting months for VFX builds. The “post” is removed from the VFX pipeline; rather, builds are completed before production starts and can be reused over and over again. As LED screens come with adjustable lighting, fast-changing backdrops and other on-set adjustments, directors, actors and more can take advantage of quick changes to increase the number of scenes filmed per day. 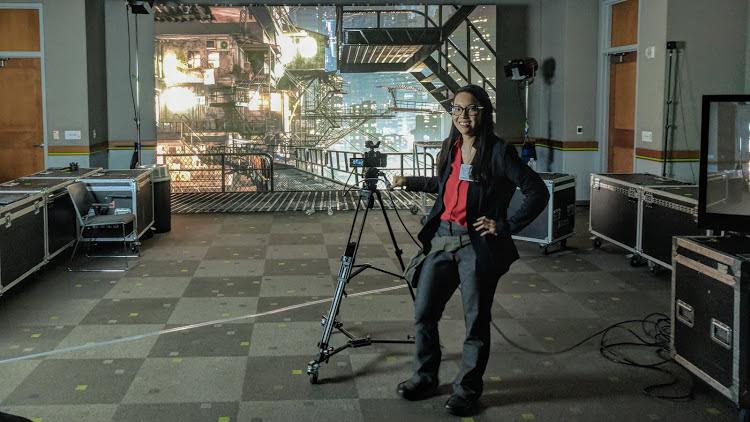 Above: Jocelyn Hsu, ARwall Chief Product Officer, in front of an ARFX backdrop

Large-scale AR has wide-ranging applications beyond entertainment as well, and many AR/VR companies building visualization tools for enterprise. Daqri is a great example and a brand we worked with in the past. They make headsets that can do everything from plotting routes through a busy factory to showing side-by-side instructions on how to put together a complicated piece of machinery. Some of our projects on are also enterprise-focused, but rather than delivering information to an individual, we focus on collaborative team spaces and more conversational style information sharing.

Whenever there’s a need to visualize spaces or datasets, there is a space for bigger than life illusions that can update a process, cut costs, and provide a powerful user experience…without headsets or goggles.

Rene Amador boasts 24 years working with 16 startups and has directed over 350 commercials, short films, and pilots. He co-founded ARwall in 2016 as an augmented reality solution for filmmakers.