A proprietor of smart home technology, August Inc. is moving to establish an ecosystem around its signature product: the home smart lock. Today the company announced the creation of August Access, which lets service providers leverage its product line. To facilitate this, August has launched three new products: a HomeKit-enabled August Smart Lock, a Keypad, and a Doorbell Cam.

“Smart home technology today is rapidly on its way to mainstream; however there are still many challenges that customers and service providers face when it comes to simple, secure home access,” August chief executive and cofounder Jason Johnson said in a statement. The goal of August Access, which is a third-party API, is to enable users to tap into trusted services without needing to worry about granting service providers a key or keep tabs on who has what access.

Partners at launch include Sears, Postmates, Pro.com, Handy, Fetch, Shyp, BloomNation, Envoy, Rinse, Hello Alfred, Wag!, Pillow, and Doorman. As partners, these companies have August’s trust to enter your home to render services when you’re not there, whether it’s delivering and installing appliances, bringing in food, picking up items for shipping, or anything else. August said its customers will be kept informed about any activity at their residence. The addition of the August Doorbell Cam will also allow users to visually verify who’s at their home.

So what exactly will these providers do? In one example August gave, Sears could offer better installation and repairs service simply because you won’t have to arrange to be home at the time. This is a notable partnership because Sears does more than 14 million home visits every year.

Sales of August’s inaugural product seem to have gone pretty well since its launch in 2014. The company said 5 million lock operations have been triggered in the past month, which it believes illustrates customers’ desire to provide access to their homes “at a rapidly growing rate.” Now August Access is the next step in its mission to “manage, monitor, and control home access from anywhere.” 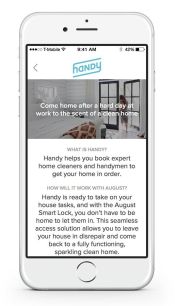 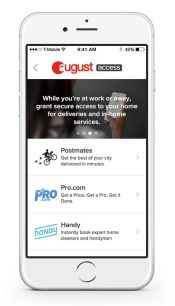 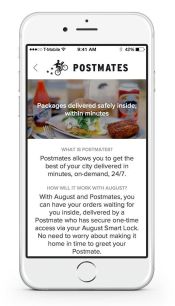 Hello Alfred, a startup that helps you manage all the on-demand services that you use to get through the day, will use August Access to help you restock your shelves. During their weekly visits, an Alfred “butler” will gain access to your home, take stock of what you need, and ensure your errands are taken care of. The option will be rolled out to all of Alfred’s users in New York and Boston now, while San Francisco users will get the feature in early December. What’s more, Alfred members can have an August Lock installed at their home for no additional fee.

Specializing in one-hour deliveries, Postmates uses August Access to easily gain access to your home and drop off items without you needing to be there. Additionally, Handy is taking advantage of this platform to clean your home while you’re not there, thereby freeing up your schedule.

While this is a step forward for August, that’s not to say it won’t be creepy to some people. In some circumstances, the benefit of having an August Smart Lock is clear — such as if you have a dog walker — but there are also times when you don’t know what’s going on in your home after they’ve gained access.

We spoke to August, and they tell us that while there’s no insurance in place in case something goes wrong, there are standards to try and minimize it. The company is working with its partners to ensure that their workers will be vetted and background checks conducted. August is tapping into behavior that people are already doing, such as giving keys to multiple people for various services, but now you’ll be able to better understand who the individuals are who are entering your home.

New partners are probably planned for the future, but August said that only those that meet its strict standards are going to be given access. These are companies that prioritize safety and security, have a hero brand, and put the customer first.

There’s no cost to August customers to use its Access platform, but you’ll have to pay for the services themselves. You can check out the new partners in the updated August app, available today. August Access is only available to customers in the United States.

The addition of the three new products shows that August is more than just a one-product company. Of course, the lineup’s not surprising given August’s mission. So what can we expect from these new offerings? 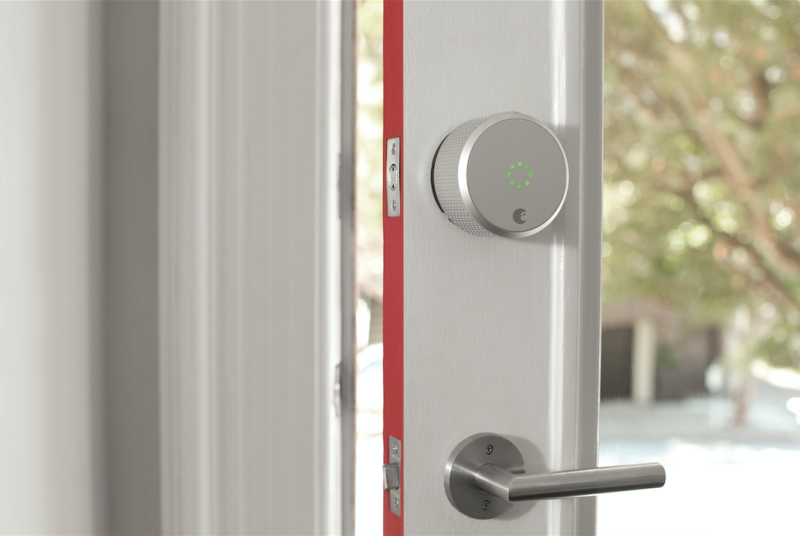 With the HomeKit edition of the August Smart Lock, Siri is being leveraged to help give you voice access to the device, including locking, unlocking, or simply checking on the status of the door. The company said that this new version has a modified industrial design with a magnetic faceplate, better grip and rotation of the lock, and a slimmer indicator at the top to help people see if it’s locked or unlocked.

The August Smart Keypad is a companion to the Smart Lock that gives access to people who don’t have a smartphone handy. Unique access codes are automatically generated for one-time use, or you can create them for people who spend a lot of time in your home, including good friends and family members. The device is battery-powered and is billed as easy to install in under 10 minutes. Until now, August devices have been cameraless. With the introduction of the August Doorbell Cam, that’s no longer the case. This device has a one-way, 140-degree HD video camera, two-way audio and intelligent motion detection, and full visibility to any activity at the door — think of it like a Dropcam affixed to your door. August’s Doorbell Cam is Wi-Fi enabled.

All of the above products are available for preorder today on August’s website, Best Buy, and Amazon. Some will also be sold at Apple. The new HomeKit-enabled Smart Lock goes for $229 (the original is $199), while the Smart Keypad sells for $79 and will ship in 2-3 weeks, and the Doorbell Cam is $199 available in silver and dark gray and will ship in 6-8 weeks.

Started by renowned designer Yves Behar and Johnson, August has made it a point to facilitate easy and quick access into the home. According to Behar:

When Jason and I first conceived August, the goal was to completely reimagine the way we experience our homes — change the paradigm around home access and control. There is a major shift happening with the connected home becoming a reality but, at the same time, there is a lot of technology that isn’t used everyday. At August, we want to ensure that our team’s hard work and expertise is applied to products and experiences that enable everyone in the home to be informed, empowered and in control on a daily basis.

The company has grown over the past year with a slew of integrations, including most recently with Comcast’s Xfinity service last week. It also has display deals with Apple, making it one of the first to have this honor. Johnson shared that since October 2014, it has seen lock operations grow 30 percent month over month — highlighting that the smart lock feature is actually being used.

“This is a product built for the whole family,” said Behar. “It’s a product that’s easy to use, requires little change, you don’t have to call an installation team. Our designs have to be beautiful, which is difficult from other tech products that are built for entertainment and not used all the time. It’s also discreet and not something that distracts you from your family. There’s a difference between designing tech products for fun and entertainment and the ones that truly change our daily lives.”

Some may say that the opening of the company’s devices to partners is a good thing, and obviously it’s a logical next step. However, there is a bit of creepiness factor associated with it.

Another criticism that may arise is how it competes against Nest. The company recently announced support of Nest’s Weave protocol, and it participates in the Works with Nest program. August doesn’t necessary challenge Nest’s control over the home space right now, and its services appear complementary to a point — in fact it does work with Nest. Right now, August appears limited to just the entryway, but that could soon change.