SAN FRANCISCO — Despite years of intense interest in 3D printing, and the proliferation of consumer-grade devices like the MakerBot, the technology is “way overhyped” for home use, Autodesk CEO Carl Bass said today.

Speaking at the Real2015 conference here, Bass argued that although there are plenty of great uses for 3D printing for both consumer and industrial use, the technology has been overblown when it comes to its potential for mainstream use. “It’s a stupid idea,” he told VentureBeat, adding that it is an “amazing” technology for a small subset of the population.

“I just think there are so many people,” Bass said, “where you bring [a 3D printer] in, for a month, people print out things they download from Thingiverse, and then it just sits there. … I think the number of people who really need to make plastic things is actually pretty small.”

Thingiverse is a design community where people can upload or download 3D models.

The statement was notable given that Bass himself is a longtime user of 3D printing technology, and Autodesk is a leader in 3D design tools. The company even makes and sells its own 3D printer, the Ember, as well as an open 3D printing platform, known as Spark. It also makes a series of consumer-grade 3D modeling tools. 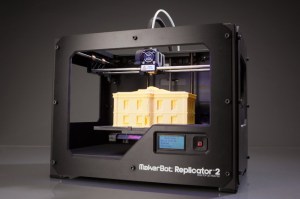 In recent years, 3D printing has gotten a lot of attention. Among the most visible companies in the field is MakerBot, a startup that eventually sold to Stratasys for $600 million in 2013. At that time, the company said it had sold 22,000 of its consumer-grade printers. And there are, of course, a wide range of other companies selling consumer 3D printers.

But Bass, who acknowledged he has 3D printers in his own house, thinks that MakerBot may be responsible for consumers getting more excited about 3D printing technology than is warranted. “I don’t begrudge anyone who wants one. I just think this idea that the MakerBot folks … used to sell their company [that 3D printing is for the masses] …was just bullshit.”

That said, Bass recognizes that the technology has captured the popular imagination over the past few years. That’s “because there’s something amazing about being able to make a 3D thing and getting the physical manifestation,” he said. “I think it’s unbelievably cool to be able to do that.”

But instead of large numbers of people using Autodesk’s tools to print their creations at home, Bass thinks a better idea is that people use the tools, like the company’s 123D line, and upload what they design to on-demand 3D printing services like Shapeways to produce their models.

“When you think about it, it’s kind of … a privileged device,” Bass said. “Who’s going to spend $2,000 so their kid can occasionally print out a toy soldier? Whereas, I’d say, if you think about a whole bunch of on-demand businesses, where I can do this thing online, in a Web browser, I push a button, I get it delivered later in the day or tomorrow, for $12, that starts being a democratized tool.”

In the end, Bass said he gets concerned when things like 3D printing get more mainstream attention than they may merit. There’s an exciting upside, but there’s also a downside. “I worry too much when people overhype technologies,” he said, “because it comes back to bite you in the butt.”