Tricentis, an Austrian enterprise-focused software testing company funded to the tune of more than $170 million, has snapped up Australia-based load-testing platform Flood IO. Terms of the deal were not disclosed.

Founded out of Vienna in 2007, Tricentis offers a range of services to help companies automate the testing of their software, and it has some big-name clients on its roster, including Toyota, BMW, Starbucks, Salesforce, SAP, and Oracle. Among its flagship offerings is Tricentis Tosca, which enables companies to continuously test their software and automatically receive real-time feedback on potential business risks associated with a particular version of software.

The company has raised $172 million in equity funding, the vast chunk of which came back in January via a $165 million series B round funded entirely by New York-based VC firm Insight Venture Partners. And it seems Tricentis is putting its cash bounty to good use by making its first known acquisition in the form of Sydney-based Flood IO.

Load-testing, for the uninitiated, involves putting deliberate demands on a website, network, device, or application to test how well it responds under peak conditions. Flood IO targets DevOps teams with tools to allow them to test how their applications perform and scale with huge loads emanating from around the world. 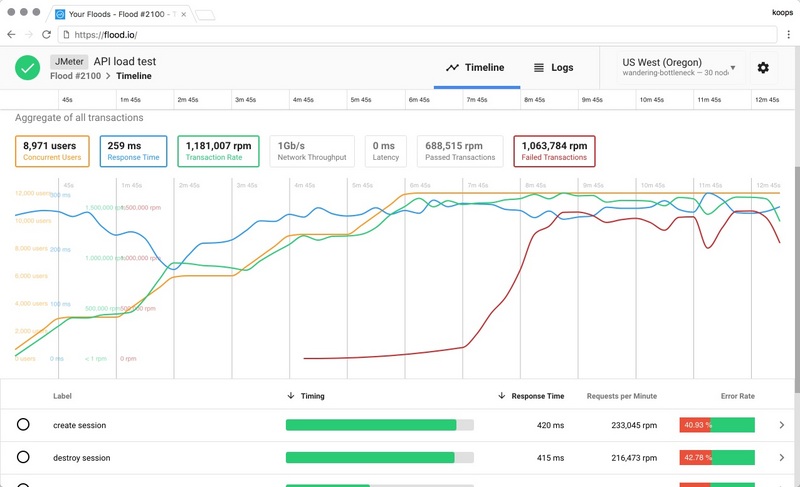 Above: Flood is a load testing platform that lets you run globally-distributed performance tests.

Through its Flood IO acquisition, Tricentis is effectively adding load-testing to its existing suite of testing tools for enterprises.

“Times have changed,” explained Tricentis CEO Sandeep Johri. “Old performance testing approaches are too late, too heavy, and too slow for today’s lean, fast-paced delivery pipelines. Yet, releasing updates without insight into their performance impact is incredibly dangerous in today’s world — with competitors just a click away. Flood’s technology offers DevOps teams unparalleled flexibility for load testing early and continuously. This acquisition enables us to take our mission of ‘transforming testing for DevOps’ to the next level.”

What does this mean for Flood IO’s existing users? Well, according to cofounder Tim Koopmans, not a great deal.

“Flood IO will continue to operate as a standalone service, so you don’t have to change a thing about the way you’re working with us,” he said, in a separate blog post.

The company is also working on some new enterprise load-testing smarts, which Koopmans said will be unveiled in October.