In the past four quarters, AWS has registered $9.94 billion in revenue — not very far off from $10 billion. That said, revenue growth is not as high as it’s been in previous quarters.

Above: Amazon Web Services revenue growth through the years.

In the second quarter, Amazon promoted Andy Jassy from AWS senior vice president to chief executive of the AWS business.

Also in the quarter AWS launched a larger version of its Snowball hardware for moving data from on-premises data centers to Amazon’s facilities, and AWS expanded the geographical reach of its SNS messaging service. Additionally Salesforce said it had selected AWS as its “preferred” cloud provider and that it would use AWS to start offering the Sales Cloud customer relationship management (CRM) service out of more data center facilities around the world.

In the first quarter of this year, AWS fetched Amazon $2.56 billion in revenue. More than half of Amazon’s operating income. That was true again in this past quarter. 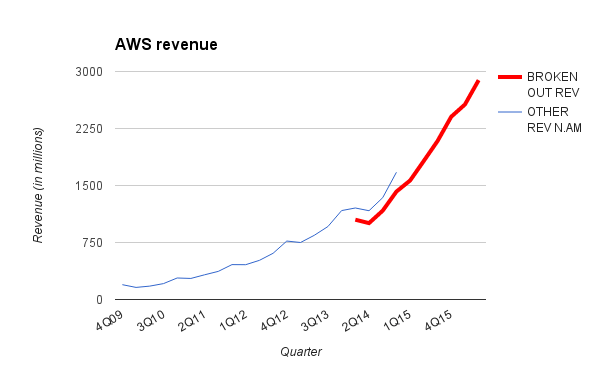 Above: Revenue over the years for Amazon Web Services.

Amazon stock was up more than 2 percent in after-hours trading.