Yes, Amazon Web Services is still a big and growing public cloud. But it’s not growing at the rate it once did.

Amazon just released its quarterly earnings report for the second quarter of 2014. And while it continues to be maddeningly nonspecific about AWS’s actual financials, it’s possible to make an educated guess.

In short, while AWS continues to grow at a healthy clip, its growth has slowed a lot relative to previous quarters.

The year-to-year quarterly revenue growth rate for Amazon’s “other” revenue — which includes the Amazon Web Services public cloud business as well as advertising services and co-branded credit card agreements — in the second quarter of 2014 came in at 38.39 percent, based on $1.16 billion in revenue. That’s lower than it’s been at least since the beginning of 2011. 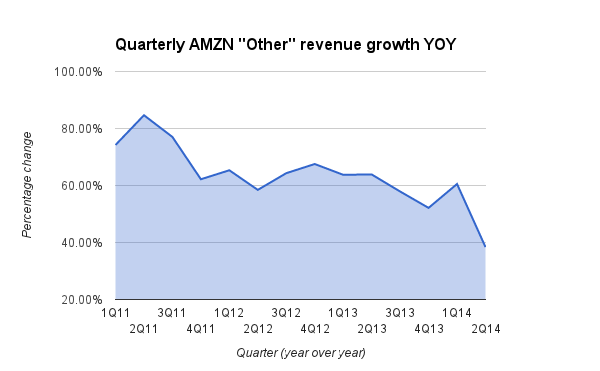 A similar pattern was in effect at the end of 2013. It could be that the greatest days of growth for AWS have passed. Then again, companies like Google and Microsoft have been challenging Amazon hard on price, features, and other characteristics.

Amazon still leads the way, by far, in the public-cloud business, as other cloud providers scratch their heads to figure out how to grow just as large, if not larger. Most corporate computing continues to take place inside companies’ own data centers, so there’s still plenty of time for competitors to make substantive progress there.

Here’s a chart showing revenue for Amazon’s “other” category: 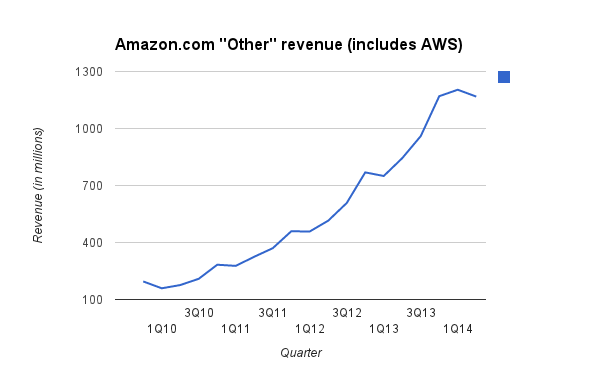 And Amazon said AWS usage grew by around 90 percent in the quarter.

Once again, Amazon released earnings figures without saying an extensive amount about exact AWS revenues, costs, and income. That could change soon, though, as AWS continues to add customers. It will eventually have to disclose more to meet accounting standards.

The Amazon cloud made plenty of headlines in the second quarter of 2014. Here’s a roundup:

Meanwhile, Amazon has been hiring.

“The AWS team grew by thousands of employees this past year, expanding AWS infrastructure, enterprise and public sector sales capabilities and allowing the team to innovate at an accelerating pace,” the company said in today’s earnings statement.

Amazon stock was down more than 7.5 percent in after-hours trading after the company’s latest earnings report came out.