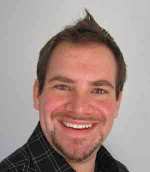 Editor’s note: VentureBeat is all about startups. And since we’re a startup ourselves, when we hit a milestone, it’s only right that we report on it. Today, we’re announcing a significant hire. Owen Thomas, a veteran of Time Inc., Wired, Red Herring, Gawker Media, and most recently NBC, is joining VentureBeat as executive editor. He joins April 1 — no fooling. I’ll let him tell you why he’s joining. — Matt Marshall

Matt Marshall thought you might have missed me, too. And so he made me an offer I couldn’t refuse: to join him at VentureBeat as his executive editor.

It’s a new job, but on familiar territory. Over the years, I’ve strayed from the tech beat to cover celebrities, finance, entertainment, and local news — all enjoyable in their own ways. But what I learned each time I’ve crossed over is that innovation is an unavoidable force across industries. It’s not a story; it’s the story. Why stand at the far shore counting ripples when you can watch from the top of the wave? That seems easier.

That’s not to say that covering tech is easy. There are facile ways to cover technology — announcing innovations rather than interpreting them. Smart entrepreneurs want praise that’s meaningful, when it’s given for hard work, innovation, and being at the top of their game. They like it when someone blows the whistle on dishonest competitors. And everyone wants to go beyond the news of the day to what it all means.

VentureBeat has already proven itself as a place for that kind of tough but fair reporting. The team and the audience Matt has assembled ooze more brains than a zombie slasher flick. Anthony, Camille, Dean, Kim-Mai, Paul, and the rest are already doing a great job capturing the pulse of Silicon Valley and tracking innovation around the world.

Technology coverage can err on the side of being too cerebral, though. It takes guts as well as smarts to be an entrepreneur. And the visceral realities of turning an idea into a business make for compelling dramas. Like a neighborhood cop who’s aware of everything that’s happening on their beat, it’s our job to find those stories, and share them with you.

One startup founder I know recently said that the problem with publications covering startups is that 99 percent of the information is private. I take that as a challenge — or rather, an opportunity. That’s why I’m back on the beat: The Valley has more stories to tell, and I’ve found a great place to tell them.

Got a story? I’m all ears. — Owen Thomas