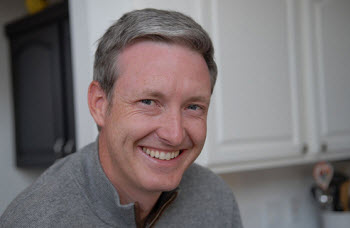 Backflip Studios has managed to defy the odds on the iPhone by coming up with games that have become big hits over and over.

The Boulder, Colo.-based game studio has just six employees and has been around only seven months, but it has already made more than $1.75 million — by selling game applications in multiple forms, serving ads in them, as well as offering virtual goods. The success shows that with the right games and right business model, even small developers can score big amid the noise of 118,000 apps on Apple’s AppStore.

“Sales come and go in spikes,” said Julian Farrior, chief executive of Backflip. “But ad revenue is steady and I can build a business on that.”

The success of Backflip’s apps is similar to the hit game Pocket God, a perennial iPhone hit that is updated every week. Pocket God, created by Bolt Creative, has sold well over a million copies and it was the subject of an earlier case study we did.

Farrior will be one of our speakers at DiscoveryBeat, a conference on how to get apps noticed. It will be in San Francisco on Dec. 8. Since Backflip has disclosed its sales numbers, it also makes an excellent case study. 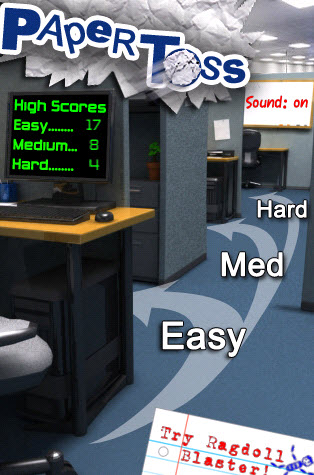 Farrior spent more than seven years at Yahoo in a variety of management roles. Then he moved to Boulder as an investor and executive at Earthscape, an app maker which saw early success on the iPhone. Amazed by the rapid growth of the iPhone, he started Backflip in April.  He said the impetus for starting his new company was to create new kinds of games that his wife, his mother, or his three-year-old daughter would play.

Farrior hired five developers — a mix of game and Internet company veterans — and they built the first game, Ragdoll Blaster, in just six weeks. After the game shipped on May 14, it became a hit. Backflip followed up with Paper Toss, a free game where you toss a wad of paper into a garbage can using the flicking feature on the iPhone’s touchscreen. That game quickly generated a whopping 5 million downloads, helping it gain the No. 1 position on the top free apps on the AppStore.

The company followed up with Paper Toss World Tour, a 99-cent app. It also did a free version of Ragdoll Blaster. And most recently, the company launched Harbor Havoc 3D.

The result of this frenzy of activity in six months has been multiple No. 1 hits and more than 13.5 million game installs. More than 10 million of those are free downloads of the Paper Toss game, which is still growing in popularity and is seeing 30,000 to 35,000 downloads a day.

But the paid installs have generated more than $1.25 million in sales. Those paid sales happen because the paid apps are cross promoted inside the company’s free apps. If someone wants to buy a cross-promoted app, they can do so with a few swipes of the finger. That is why the hot free game Paper Toss became a “distribution channel” unto itself. Thanks to the additional attention from the free apps, sales of the paid version of Ragdoll Blaster surpassed 7,500 per day. 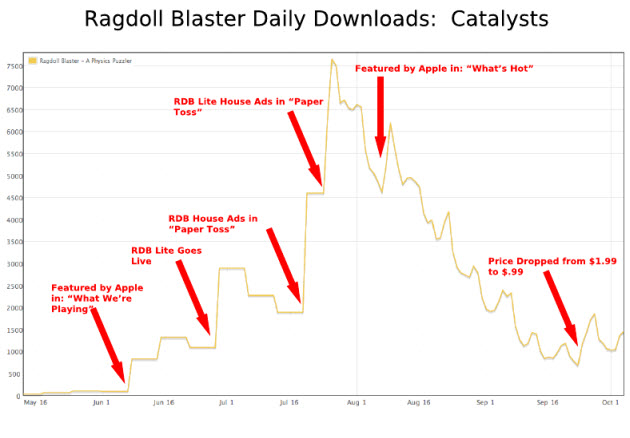 One of the brightest ideas the company had to was to insert ads into its free Paper Toss game. Farrior already knew Jason Spero, an executive at AdMob, a maker of a platform that inserts ads into iPhone games. 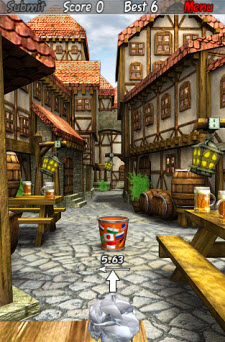 So Backflip inserted the AdMob ad platform into the Paper Toss game after it had already become popular, as you can see from the chart above. Now the ads are generating 50 percent of monthly revenues for the company, with more than $125,000 in ad revenues coming in each month on a steady basis. The ads have boosted total company revenue in seven months to above $1.75 million. Farrior also used Google ads to compare the performance of the AdMob ads, but Google’s platform didn’t perform as well (which is why Google paid $750 million to buy AdMob).

“We thought we would count on app sales alone,” Farrior said. “But we backed into this ad-based revenue model.”

The great thing about having a high-ranking hit with the free Paper Toss is that the company can cross promote its other paid games. That helped raise Ragdoll Blaster into the rarefied list of the top 50 ranks of paid apps and it stayed in the top five for seven weeks. In August, Ragdoll Blaster was the highest grossing app on the AppStore. The app saw an even bigger spike when Apple featured it on the AppStore, and it also got a boost when the company launched a free version, Rag Doll Blaster Lite. Inside the Lite version, about 3 percent of the players click on an ad for the real game. That is much higher than the typical 0.25 percent click-through rate for web banner ads. And the paid app got a spike in sales when Backflip cut the price from $1.99 to 99 cents.

Farrior credited word-of-mouth for helping the game spread as well. It is easy to create game reviews on the iPhone platform, and fans have created more than 50,000 reviews of Paper Toss. That helps it get noticed more easily among on the AppStore. 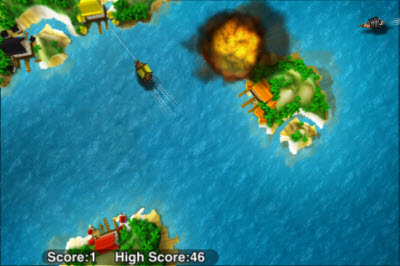 Now Backflip is using the free app to promote Harbor Havoc 3D, Backflip’s newest app which sells for $2. That game, where you have to guide ships in a harbor using the iPhone’s touchscreen (much like the collision-avoidance game Flight Control), also has in-app purchases, meaning you can buy virtual goods in the game for real money.

The new game also uses Ngmoco’s Plus+ platform, which lets players challenge each other in multiplayer contests and compare their progress to a leaderboard. Plus+ can also cross promote Backflip’s games to more than 20 million players who play other Ngmoco games. That should only strengthen Backflip’s audience, which now amounts to more than 4 million users a month.

Can the team keep producing hits? Farrior notes with some confidence that “there is a lot of mediocrity in the AppStore.” Farrior has thought of shifting to Android, but right now it makes the most sense for him to get more bang for his buck by putting developers to work on more iPhone games. He would like Apple to improve the platform, but his motto is “cry less, work more.” At some point, he will move to other platforms to spread out his risk.

In 2010, Farrior is doubling the size of his team to 12 people. Farrior believes he can grow Backflip into a larger company. If he can pull of his current expansion, then he will consider raising money, but he doesn’t want to do that if he doesn’t need the money. Farrior says that running Backflip is the best job he ever had, but it remains to be seen if it will graduate from the lifestyle improvement business to a more viable game business, which might mean expanding the business in other territories such as the Bay Area. Ragdoll Blaster 2 is coming in January. 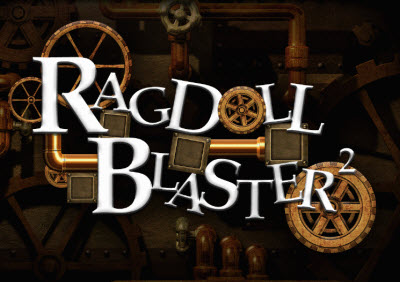 — design for the medium
— make fun games. play test lots
— do not be afraid to move on if something isn’t working
— design for the audience
— meet the press
— beg apple for whatever you need
— and listen to users.

[The excitement in this industry is one of the reasons why we’re holding an executive event called DiscoveryBeat on Dec. 8 in San Francisco. The event will explore the secret recipe for getting your social game or mobile phone application “discovered” in an age of increasing noise. Get your ticket today].